Screen yellow where white should be

I haven't dropped my macbook or anything at all recently, and I'm experiencing a very peculiar issue. Last night everything was fine, but this morning I turned on my mac and the first thing that happened was that I saw vertical red lines all over the screen where white should be and flickering green dots a little bit on where black should be. After a couple of minutes all of that disappeared and instead it's now only yellow where white should be. Here are two screenshots, I'm not sure if you'll be able to see it as it may only appear on my screen, but please let me know:

I have the tools necessary to put apart my laptop (like the 3 basic screws) is there anything I can do? I don't want to go to the Apple Store just yet as their repair costs are probably expensive and I'm not sure about my warranty but I think it may have expired already, so I'll only go if I can't fix it myself. What exactly should I do?

I had the exact same problem and just wanted to write how I fixed it for anybody else trying to find a solution.

There is a cable that goes between the computer and the screen, seen in step number 9 in this guide: MacBook Unibody Model A1278 LVDS Display Cable Replacement

Do everything in that guide until and including step 5. When you have the lower case removed, turn the computer on. Now lift the plastic tab on the cable shown in step 9, but do not unplug the cable. This made the display return to normal for me and also stopped a high pitched noise coming from the connection.

Thank you so much I thought I would have to spend a lot of money to get it fixed.

First try running Apple Hardware Test AHT to see if anything pops up there.

I have had this yellow screen problem for nearly a year on this antique beast that I love, but none of the solutions suggested anywhere worked, including the one here pertaining to the video cable. So, after tearing my laptop down and rebuilding it numerous times without success, I finally decided to take a different direction. I had noticed that hitting top cover slightly below and to the left of the keyboard (near the USB ports) often made the problem disappear momentarily - sometimes for a few seconds, sometimes less. I got curious since this was nowhere near the monitor cable in the display, so I explored the area near the USB ports.

What I quickly discovered was an odd sort of silicone caulk, some clear, some black, acting perhaps as an adhesive on the motherboard around the four corners of an FPGA chip from Lattice Semiconductors. It looked like the result of a repair, not original manufacturing, and I had the laptop in to repair several times over the last 7 years. What I found was that the chip had a little "give"; it moved when I pushed it. And by pushing firmly down with my thumb immediately and so far permanently fixed the problem. I'm mystified why this chip would be in the video datapath, not a common role in my experience, but it certainly has the processing power to handle things that fast. But it worked.

So since this is a totally different repair than all others suggested, perhaps it will be what works for at least one more person. The chip in question is square, just in from the edge of the board with the USB ports, between the second and third port I'd say, maybe 30mm (1.5") in from the edge. Photo of the chip attached with the strange silicone caulk-looking material around the four corners. 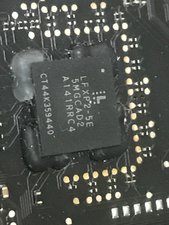 In my case, the black areas of the screen were shown in green. After applying pressure on the chip (LFXP2-5E) that you indicate, the problem has disappeared. Thank you so much for sharing it. A big hug

It fixed itself yesterday on its own o.O Really weird, though if it does happen again then I guess I should just replace the display. Thanks for your answer, really appreciate, very helpful to try to figure it out! :)