I i have repaired sever PS3's over the past month but i have not encountered something like this.

The PS3 (fat) fan is not spinning. The result being that the PS3 boots with graphics and sound for a few seconds or 1 minute max before shutting down automatically, like its overheating.

I have replaced the fan unit, replaced the PSU, re-flowed Motherboard and replaced all thermal material components. Still the problem persists.

It seems like the fan is not getting power from the motherboard even though there seems to be no damage.

Does anyone have a solution apart from replacing the motherboard?

- When returned from repair fan runs at max from start up.

Garron, it is possible that the thermal sensor in the PS3's got damaged during the reflow. Check the fan connector and see if you get any power to it. 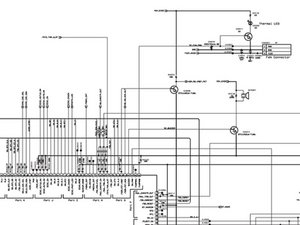 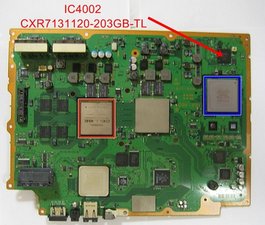 Do you have a info/guide on fixing either of those? A Google search turns up nothing useful.

Not really a guide, but if you check the schematic, there are three contacts on the connector. 1 is the PWM which connects to IC4002 (CXR7131120-203GB-TL) , 2 is Ground and 3 is +12V. PWM is getting the signal from the processor at port G and controls the speed of the Fan. I attached an image of where the control processor is and some of the schematic. Your board layout may differ somewhat, but should be about the same setup. I think to check the PWM function, you would have to have an oscilloscope since it is a square wave;-) I will add the images as an update to my original answer.

Thanks! This is exactly what i'm looking for to be able to make a start.

Thank you for accepting my answer. Best of luck to you.

Re solder the connection terminals from the fan to the mb

My ps3 keeps turning off seconds after I turn it on. Just wondering if anyone had any tips

My ps3 fan spins, but slowly and doesn't ramp up as the ps3 gets warmer.

Fan test mode works, and the fan spins quickly then.

It must be the fan control circuit that doesn't get the correct temp reading. Could this be a faulty thermal led? (In schematic)

My fan connector broke loose when disassembling my PS3 slim (CECH2004A). Might be my fault but I’m pretty sure Sony purposely built a fairly fragile part there, as the rest of the connectors are quite solid (and Sony aren’t renown for openness). Luckily the PS3 (this very model, at least) still accepts to boot even without a fan, so it’s an easy hack to connect an external power supply to the fan. An old 5v power supply (usb charger) did the trick. Simply conect the fan’s negative wire (black) to the charger’s negative wire and the other two to the charger’s positive wire. There’s also enough space to drill a small hole for the cable near the power plug. 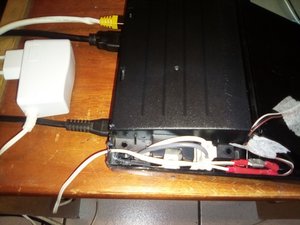 The downside is the fan is on all the time so it’s a bit noisy and it might reduce your fan’s lifespan but it’s a very easy hack to keep your PS3 alive.

See https://www.youtube.com/watch?v=6SXydvxn... (not my video but the exact same trick)