Why does my Mac have a blue screen tint

I have recently replaced a screen in a MacBook. The original screen had a faulty screen cable and not being my Macbook I do not know what the screen looked like while it was working.

Now after replacing the screen (whole lid unit) the screen had a blue tint to it. The Mac will still start and run correctly. Now we originally thought that this was just a faulty screen or screen cable so we replaced the screen yet again however this screen is doing the same thing.

I am now stuck for ideas as to getting the screen to display correctly, we have done SMC and PRAM resets. After reading online and finding people with the same problems they reported switching the graphics however that is not a option on this model of Mac.

If any one has any ideas that would be great :) 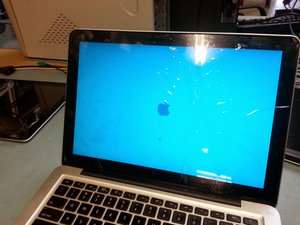 Did you check your display settings? Depending on your OS release you can adjust the color saturation & gamma with the display control panel or in the newer OS-X in the Utility folder you should find the ColorSync Utility which you can repair or adjust the settings.

If these don't correct a known good color sample card comparison you may haves a bad display.

Yes I have been through and checked those settings. As for it being a bad display we have tested the screen/cable (entire lid) on another mac and it works fine.

Just another piece of information the external display will still show colours correctly. At this point I am thinking that whatever has damaged the original screen has also damaged the mainboard on the mac causing the screen to tint blue.

If the external is OK it the internal should be OK. The signal source is the same.

The problem turned out to be bent pins on the connector on the main-board where the screen cable plugs in. These broken pins looks to of shorted something inside the connector causing the screen to become blue. Unfortunately removing the pins has not solved the problem but at least has narrowed down what caused it.