iTunes recognizes it while connected, but cannot charge.

Maybe someone had a similar experience and can help.

Initially I had problems with the display just going dead (like the power suddenly cut off and display got fuzzy then black). What usually happened afterwards was that the apple logo would appear and the only way to get back into the home screen was doing a soft reset. These crashes got more frequent as I tried using the Safari app, running simple web surfing .

Thinking the battery was bad, I replaced it. But it seems I fixed one problem, but happened on another: the battery will not charge by PC, not by wall charger.

It seems that I can trick it into charging if I connect the iPhone to the PC and shut down my computer and then reboot it. However this is short-lived as it only charges up to about maybe 20% and back to square one. The iPhone operates normally but its so annoying that I cannot seem to fully charge the battery, even if I " trick " it into charging.

Oddly enough, I think it's strange that iTunes recognizes it but it doesn't charge. No charge status shown in the indicator icon. (Unless I " trick " it with rebooting PC). I've been able to restore it fully to factory settings twice ( iOS 6.1.6) , but the non-charging battery problem persists.

I got another 3GS with "proven" components and tried to swap them out with the problem one. Using parts from the proven one , I had No luck with changing the dock connector, the battery, nor the display assembly. In other words, the problem remains, which worries me to think that something may be wrong with the system board.

Would there be another way to fix this problem? Is there a way to test the system board for faults?

Your thoughts are appreciated , thanks.

Have you tried using a different charging cable? Occasionally, when mine become damaged, they act oddly, once even making the digitizer not respond, but I plugged it in with a different cable and all was well.

Wittygremlin is right... it is either thine to change the charging cable but it could also come from the USB port... I had the same problem,e specially if I was charging it out of my laptop, well at the time it was a Toshiba, now I have changed it for a MacBook Pro and having changed the charging cable these issues are now history... consider buying a travel World travel adapter kit...

Thank you, both for responding.

Yes, I tried 2 different sync cables, all belkin and one of them was brand new. I wonder if I maybe have to test it with an "official" Apple sync cable w/ it's power adapter (expensive to replace)?

Unfortunately, I don't think this is the issue since these cables still work ok with my other ip4 and ip4s. Both charge and sync properly.

Been doing some reading and I wonder if this problem is related to a failing "power management" IC. If it does, then I'm done with it, since I don't have the proper equipment (or experience) to unsolder / solder these tiny surface mount ICs.

I forgot to mention: Also tried different USB ports, a desktop PC, and a laptop.

Edward Castillo, make sure that your dock connector is nice and clean and that you do not have any bend, broken or corroded pins. You can clean it with some high grade isopropyl alcohol on a cotton swab and/ or a few puffs of compressed air. If that should check out okay, consider changing the battery. It is possible that your battery will no longer receive/hold a charge. Should it still give you problems after you replace, you need to check the charging fuses as well as the PMIC. Hope this helps, good luck. 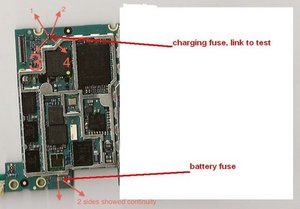 Thanks for your reply and the cool picture showing the location of the two fuses. I will try to check those fuses for continuity this weekend with a multimeter.

Also I will try to get some 94% or higher isopropyl alcohol to clean the connector.

Hey guys, I am having the same problem as Edward here, and surprisingly that is my name too lol. The only difference is that this is happening to me on an iphone 5 device. I've tried multiple cables (Originals and 3rd party), cleaned the charging port, replaced the charging port, replaced the battery, and swapped mother boards from a working iphone 5. It seems to me there is something wrong with the motherboard but I have no idea if there is a broken capacitor or any damaged tiny parts. I have no idea what to look for anyway and would appreicate some help. itunes does recognize the phone but it simply will not charge.

I have an iPhone 5c that is having this problem. When I plug it into the computer it will sync and show that it's charging, but the battery percentage goes down. I have tried plugging it in with a different cord, both cords are original iPhone charge cords, and I have tried plugging it into a power block. I have several "parts phones" with tested parts which I use for diagnostics and replacement parts. This phone had a damaged battery before, I am having this problem with the brand new battery that I just installed. I also replaced the charge port with a tested, functional one. The only way I have been able to charge the battery is to take it out and install it in a different phone, where it will charge just fine using the same cord and USB port.

I know this is an old thread and I probably won't see any responses, but I just wanted to add my story. Maybe somebody later on will see this and I'll save them a few steps of diagnostics.

If anybody has an idea what could be wrong with it I would love to hear it. I'll post again if I figure it out.