Liquid spill, will not charge or power on.

A friend of mine brought me his Early 2015 Retina MB Pro 13" after his youngest child spilled juice on the keyboard. The computer did work afterwards but he was having some charging issues. When I got it, the computer would not power on, it would give the "Plug in AC Adapter" symbol. Okay so I plugged it in, and hitting the power button gives me the "Low Battery symbol". Removed the bottom cover and inspected, there actually wasn't much corrosion, other than a small spot on the logic board, and (after removing the flash memory) some on the SSD connector. Cleaned all visible corrosion with 91% Isopropyl Alcohol, took the MagSafe port out and cleaned it to remove debris and any possible corrosion. Put it back together (didn't reinstall bottom cover) and it powered on. SWEET! I was only able to login to the Guest account, therefore I could not do any diagnostics due to the restrictions. Shut it down so I could login to the Admin account (after I got the password) and it wouldn't turn back on.

I've tried unplugging the battery from the logic board to power it on, nothing. MagSafe LED is illuminated with the amber light, and when I do the SMC Reset key combo, it goes green, then back to amber.

I am going to pull the logic board out to see if there may be some corrosion on the other side of the board, but does anyone have any other suggestions? Will post pictures as well. 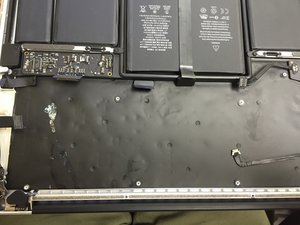 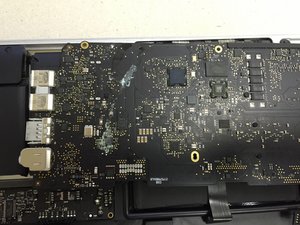 UPDATE: Cleaned all visible corrosion and reassembled. Plugged it in, and the LED light was solid green, did the SMC reset, went to amber. Device still does not power on. Figured out the charger I was using was for a MB Air, so I went and got the original one, now the LED is flashing green kind of quickly, and will not power on.

Might need to replace to battery, i see corrosion on the logic board, i would give it an alcohol bath over night and gently brush it good the next morning when waking up, also check to see if there's corrosion on the battery connector itself,

To have any chance at a lasting repair the logic board itself will need cleaned with an quality ultrasonic cleaner. Alcohol and a tooth brush may work temporally but will fail in time. If you can't get it to power on I would also be leaning towards the keyboard is bad as well from the liquid spill, there are ways to short pins on the board to force it to turn on & bypass the keyboard to confirm that, that is the direction I would go.

I wouldn't think it is the keyboard since it has powered on since the incident, and doing the SMC reset makes the LED on the power adapter change colors.

Must have missed that part, sorry. The more times it is powered on after liquid and not throughly cleaned the more likely the board will start to have shorts & blown caps. Pull the board the clean it as best you can. Unfortunately if it recognizes smc reset and doesn't power on at this point it already sounds like the board has more issues than a clean will fix.

Yeah what's odd is that it powered on for me and like I mentioned in the main post, I was able to go onto the guest account. Then after shutting it down to go back and try to log into the main account, it wouldn't power back on.

Also, with a MB Air charger, I was getting the low power symbol, and after cleaning it, I got the low power symbol once, and the charger LED was green some times, and amber others. Then using the proper charger, it blinks green rapidly. I'll try a ultrasonic bath and see what I can come up with.

Purchased a logic board from ifixit, installed it and runs perfect now! Saved a couple hundred bucks by doing it in house instead of sending the laptop to a repair shop! Thanks for the help everyone!

SN: Does anyone know if the old logic board is worth selling? Or worth sending to somebody with an Ultrasonic cleaner and reselling once repaired?