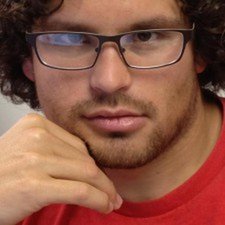 Spilled water, which parts to replace?

I spilled water on my 2014 Macbook Air. I had a keyboard cover on, so I don't believe much got into the workings from the top. However, it appears that a decent amount of water got in through the bottom, from what I can tell. I didn't realize how much was in it, so I turned it on a couple times before it dried out, but now it won't turn on at all.

I took apart the entire bottom case according to the iFixit guide (MacBook Air 13" Early 2014 Upper Case Replacement), looking for signs of water damage. However, there's only one dot that's turned red, on the underside of the battery.

Are there any ways to diagnose which parts of the machine are damaged? Most guides say changes are the logic board needs to be replaced, but since there's no activated water stickers on it, I'm hesitant to purchase another one in case the problem is elsewhere. Is the battery the place to start?

Liquid spills are the hardest things to diagnose. I say that as a professional. I hate them. If your data was not backed up you can probably recover that with a OWC EnvoyPro enclosure. Do your research for a reputable Mac professional in your area and have him (or her) take a look. Try Thumbtack.com.

See what one is selling for for parts on eBay, and what your estimated repair cost will be.

This could be a real money pit.

Contact your homeowners or renters insurance agent and see if you are covered and what the deductable is.

Check with Apple and ask what their "Flat Rate", repair would cost as a last resort.

Thanks, I will look into those. What methods do you use to try and diagnose them?

I have batteries and parts in stock, so I just plug a known working battery in.

If you found water underneath the battery then more than likely the motherboard has shorted out and malfunctioned. Sounds like you need to replace at least the motherboard. You may find out that other parts may also need replacing, RAM, hard drive, etc. all depending on the extent of the damage from the water and where the short occurred on the motherboard.

Yes that is the same as the logic board. If the liquid was diet lemonade the sugar from the lemonade could cause corrosion.

Take some pics of the board.

Here are pictures of the logic board: http://m.imgur.com/chDHdnu,ZK02c1h,MoE7q...