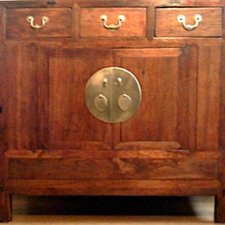 What is the part name and number for the internal power connector?

Having successfully completed an upper case replacement, I discovered to my chagrin that the connector (female) into which one plugs the 'other' end of the magsafe adapter was simply.... missing. The logic board is intact. The magsafe adapter works fine. I just need this one tiny part (see two small photos, below) to put everything in working order. I have done my best to determine what the part is called, who makes it, and whether/where I can buy a couple of them. So far, I have come up short.

I understand how the pins work; I know what I need to do; I just need that one part! I've narrowed the selection to this: it is a Molex 5-pin wire-to-board connector, and it is very thin.

Any guidance anyone can offer will be much appreciated. Alternatively, if the only solution is to build my own teensy-weensy connector, if anyone could point me towards relevant info, I'd also be grateful. To be clear: I know the logic board works; I know all the connections work; I just don't want to have to hold the other end of the connector onto the logic board with my finger to charge the thing. 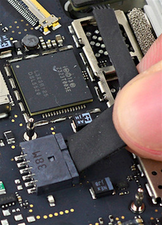 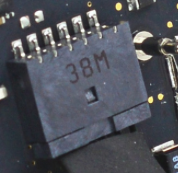 Yes, the images are from iFixit. The reason I used the iFixit photo was that it was from the exact model of computer I have: a late 2013 13" Macbook Pro (retina) - thus everything in the photo is in the same position in on my machine. I replaced the upper case using an iFixit guide (which was terrific, BTW). This is the same machine I wrote in about earlier, where there was an internal system conflict that caused the trackpad to malfunction. I wiped the hard drive, partitioned it, and tried to install the trackpad update Apple claims to have produced - to no avail. Even after replacing the entire upper case, I had to re-wipe and rebuild the hard drive again to get rid of the conflict between the internal USB keyboard and the internal USB trackpad. Both now work like a charm, if only I could power the computer. If nothing else, the process has been very educational. See photos, below: 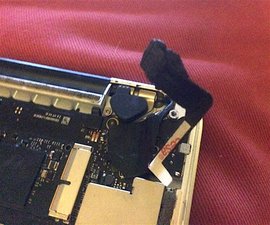 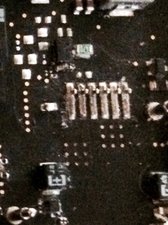 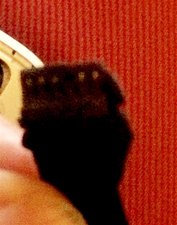 Can you post some images of the connector from your system and the location on the logic board the connector was located. That would be a great help so we can guide you in the correct direction to fix your system.

FYI: Comments don't allow posting of images, but Answers & Updates as well as original Questions do!

After many months, I have finally solved my problem. First, I tried to find this part everywhere under the sun; I tried Mouser (nope); I tried making the part using Sugru (a flop); I tried using (purportedly) conductive wire glue (not adhesive and, as far as I can tell, not conductive either). I also went to the Apple store, where one of the resident 'Geniuses' told me not to mess with Apple's computers, and admonished me not to ask again: if anyone gave me the part, it would be a firing offense. (I don't think he was aware that once it had been sold to me, the computer was mine - not Apple's - because he kept referring to it as "our computer"). In short, nothing worked. I refused to give up, however. The laptop (late 2013 13" Macbook Pro) cost me nearly $1,500.00 and I was not about to buy a new one just because of a teensy bit of missing plastic. I had already established that when I held the male connector part of the Magsafe adapter to the 5 pins on the logic board at just the right angle, I could power the computer.

What I did: I held it in that exact spot (checking to make sure it would charge), then used Gorilla Tape (made by the same company that sells Gorilla Glue) to set it in place. Holding it in place, I used a blow dryer to heat it up to the point where the adhesive melted enough to keep it precisely where it needed to be. Yes, it got pretty hot. Yes, it was boring holding the connector in place for close to an hour. No big deal, since I now have my laptop back and working like a charm. Note: this is the same laptop with which I had trackpad problems, but no more since I replaced the operating system, the keyboard, and the problematic trackpad.

I'd get out a digital micrometer, measure in all three directions for size - then go to Mouser and start hunting.

Looking at the photo, I'm unclear on what's happened here. Has the solder connection for the female socket been broken, or has the ribbon cable pulled out from the male connector?

The solder connection to the logic board is not broken -- it's just that somehow when I gently pried the thing to remove the male from the female connector, the female connector housing came along with it :-(. Now I can't find it - it may have broken into several pieces and scattered across the living room floor for all I know, and believe me, I've looked!. The ribbon cable to the male connector is 100% A-OK. I Here are the dimensions: Male connector is (as close as I can tell) just shy of 1 cm across -- 9 mm as best as I can tell. Thickness is 2-3 mm. I've spent hours on Mouser trying to identify the right part, but so far have not been able to. Thanks!