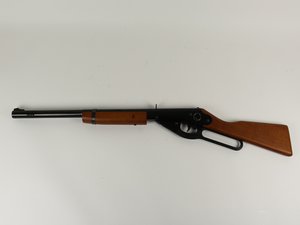 BB gun will $!^& but not fire,doesn't seem to compress spring

so my son,daughter and i were enjoy some pinking when my daughter says the bb gun wont fire. put it on safe and took if from her, I manually cocked the lever but if felt like there was no resistance, took gun off safe aimed and attempted to fire, nothing happened, tried the safety a few times to ensure it wasn't stuck.. that isn't the problem..

apparently there is some sort of language filter here, I will assume you guys/gals know what I am trying to say about the condition of the gun.

sure, there is another word but..

bpjefferson365 and @mayer, my thought is more related to the plunger and the lever not connecting. If the lever does not connect with the plunger then there will be no resistance. Even if the spring would be broken, it would still have some resistance since it can not move anywhere. See if this diagram will help a bit. Here is a really good tutorial, even so the model is different. It should still apply to your Daisy as well.

It may be c*cked now.

Nah, the mechanism is not working for that