the previous owner reported that after a liquid spill, the LCD stopped working. he used it with an external monitor for some time, but now it seems to struggle with booting and pinwheels when booted.

some component on the logic board near the LVDS connector is/was destroyed and unidentifiable. this logic board appears different than pictures i've seen online.

i scrubbed the board down really well, noticing some corrosion on the side of the EFI chip and around the wifi card.

the water seems to have entered near the hinge, as the SSD moisture indicator has turned red, but none else. 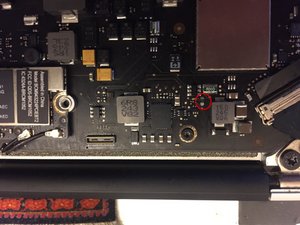 Ok so in the last few minutes I've determined that the fuse was there. For troubleshooting purpose, I attached a fuse pulled from another spare board, and it popped immediately