Some days ago my friend gave me an old iBook from his basement.

In fact, machine wasn't working for about 5 years.

No one didn't know the condition, because they lost an Apple power supply.

As a fan of Apple brand - I took it with me.

I have a tunable power supply, so I put 24V and with the help of modified 2.5 mm jack an old iBook turns on. I was really happy.

I heard an apple chime, apple logo appeared and download indicator started to spin, but suddenly stuck. I realised that I don't hear the fan noise. I tried to start it several time more, but everything became worse and worse. On the third try - I didn't see any apple logo, on the fifth - I saw an RGB mosaic and turn it off.

I decided, that problem appears because of overheating.

I disassembled an iBook to monitor the temperatures.

Now I see that:

-Fan doesn't spin at all. Fan, as itself, is working correctly - I tested it. I turned on iBook about 50 times and fan rotates at the start only 3 times after manipulation with PMU or battery or something else, which I can't explain.

-Battery is completely dead. No charge, no green indicators - nothing.

-HDD is working properly, maybe there is some BAD-sectors, but I can say that the whole problem is not dependent on it. Because then I pull out the HDD cable from the MoBo and started the laptop - folder with question mark started to blink and after a few seconds freezed - didn't blink anymore.

Now I will describe the things, which I tried to do with iBook.

-I put a 120mm fan on the radiator and started the laptop - nothing changed.

It is still freeze. I'm not sure, but think that 120 mm fan running on full speed is a better cooling versus 30 mm fan...

-I booted it by holding cmd+s - all info downloaded properly and I could use keyboard to type commands, but the end was the same - FREEZE. 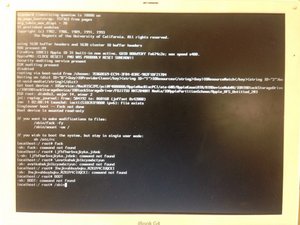 -I did an OS 9.2.2 compact drive - put it in the SuperDrive and started by holding C - Apple logo appeared, download indicator started to spin and FREEZE.

I really don't know to do... Maybe I need to change the thermal pads, or at least flip them over...

What do you think, guys?

I have a few iBooks that do weird things too, in the end, I just use them for spare parts.

Try running TechTools on it?

Sorry, with a Mac that old, it could be anything.

Maybe you have any hypothesis about this case?

I really don't know what is a TechTools..