I wanted to upgrade my mac mini hd, but at my first attempt to remove the fan connector I broke it off the motherboard 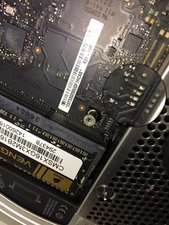 So I took it to a Mac repair center and they reconnected the connector to the motherboard and the fan was working again. The only problem is that it was working at full speed all the time.

The guy at the repair center told me that it happens sometimes but that I can just download a software to regulate the fan, so I didn't make a big deal out of it.

But when I got home, I realized that the fan was spinning all the time because the CPU was always busy at 100%! Even when booting up or even in recovery mode, the CPU is always busy and the fan is running like crazy.

I ran activity monitor and I can see a few process open but they're taking 100% of the CPU. I even tried to reinstall the OS (el capitan) from scratch but with no luck.

Does anyone know what I could do to try and fix this issue?

Can the replacement of the fan connector have cause this?

They have most likely knocked a component off of the board responsible for the sensing circuitry, or forgotten to plug a part in. I do not work on many Mac Minis, but on MacBooks, the fan will spin high speed in these cases. The high fan speed isn't a fault with the fan or fan connector.

Whatever the problem is, it is not your responsibility to fix it. Take it back to whoever repaired it to either fix this or refund you, since they haven't done a proper job. It is irresponsible of them to tell you to try and alter the fan speed using software, they most likely knew it wasn't fixed properly and just wanted to get the Mac out of there.

Yeah you're right, I took the macmini back and hopefully they will fix it.

Thanks for your help!