I'm cursed or maybe my iPhones are :s

So basically I've changed maybe 5 iPhone 6 screens successfully and many others its all been fairly straight forward till now.

It started with two iPhone 6 phones one was a bit bashed up the other was ok but a little scratched so I started changing the screens. And it looked ok until the final assemble and right at the end there was a tinny gap on both sides of the screen. So I did another one and the same. This went on for ages I'm now at 7 heat shields 7 screens and 4 frames and the closest I can get is still not perfect :O .

The heat shields seem to not fit well but how can this be even with new shields and screens! And this is why I am cursed :) .

At least until I find the answer thanks! 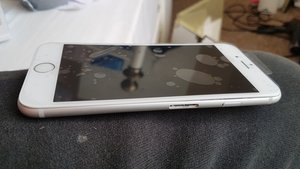 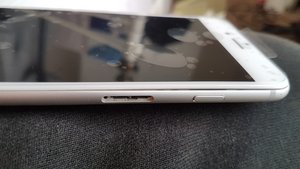 Each time I try there always a slight bend or bit of pressure from behind. The top two holes from behind are not lining up well as you can see... but all this stuff is from different manufacturers they can't all be out? There's more to say but this post is getting too long! Tnx

Well they are new batteries inside... I've noticed some definite gaps between the heat shields and the screen screw holes... ill add pictures...

Here on my white screen their is definitely a gap if I line the other side up on another screen from a different manufacturer it's more like the holes are slightly misaligned. See here 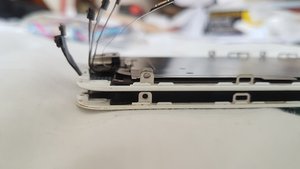 bottom one is an apple display.

So basically possibly i got really unlucky if this is the cause. So it seems unlikely. But is it these small misalignments that are causing the problems? Can I bend parts so they match up or put spacers in? Still very odd :( .

I'll add this one of the two main original frames with bits in... can't see anything sticking up. Thanks 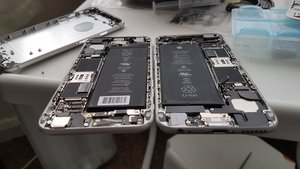 Hmm well I'm still confused :s . I took a break from the iPhone 6 phones because it was driving me mad. And I came back fresh ready to go... Bought a new set of OEM high quality bits... Looked great until the final test of pressing the screen when on and the rainbow squashed LCD crystals appeared again!! If something is bent it's so tiny it's like .001 mm this is stumping me unless this is as good as it gets?! See photos here (the bit near my thumb... Not the rainbow in left side that's just photo distortion):

I did notice a lot of original iPhone users complaining of similar problems so if phones bought from Apple are doing it then maybe I'll never get 100 percent? At one point I wondered if the ribbon cables were pushing as well....

I'll add a few more photos soon. But all I can see is the screen is slightly buckled almost unnoticeable... Just can't figure it out...I had many screen changes go perfectly until these three iPhone 6 phones. I now have many screens parts etc. And all do not fit perfectly. :( Thanks.

Ok so checked brackets and they are fairly tight but maybe not enough after trying to tighten : 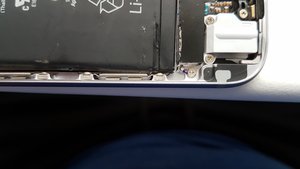 They also don't have the sponge the original IPhone's have... But I was told this is not necessary.

Please note the battery is not stuck down right now. Thx

After attempting so many different screens, I would look at the internal components. If the battery is swelling or something gets stuck under the logic board, it could potentially lift the display. Also, make sure that the screen is locking into the side brackets correctly. :)

I agree with you, it could even be a slightly bent frame

I find out that a bent iPhone metal frame (including dented corners) or bloated battery are usually the cause.

Why do you still have the red stickers on the displays??

One battery is not stuck down yet but I'm getting problems with an empty frame as well anyway. Don't worry about red stickers I just took them off when testing and put them back on after. I have three white screens the stickers don't seem affect width with heat shields anyway. Tnx

Remove the backplate to see if there are stuff stuck underneath.

The misaligned hole is supposed to have a screw inside to lock it in place and if the parts are correctly manufactured, there should be no gaps.

Yes so possibly i have two white screens that have the screw holes too wide and one that's got them slightly too high :s . Just seems odd that I could be that unlucky! They swapped two screens already at one company. :s tnx

The answer is cold press farm.

It's the Bazel of the screen which is cheap quality.

Solution: see the picture and pres with the screw driver or some metal thing to lessen the gap between the hings so they will hold the the LCD properly. You have to press harder to fit the LCD in but once its dose. Will fit properly.