Second generation of Wi-Fi iPad, released on March 11, 2011. Model number A1395. Repair is difficult and will require heat.

Where does this cable go?

I opened my iPad to replace the digitizer. After opening it, I noticed that one black cable directly on the right side of the home button was loose. For a better idea of what I'm talking about, see pics. 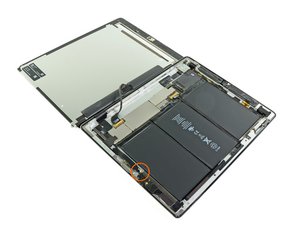 This cable is loose now and I can't figure out where it was attached.

Also, the iPad does not charge properly anmore. When I plug in the 30pin cable it doesn't recognize that it's being charged. Charging also takes awkwardly long (after 14 hours it got to ~51%) but as I already said, It does not show the charging symbols on the display.

The display on the other hand works perfectly fine. The iPad is still opened up.

Does anyone know where this cable belongs to? Or any other idea why it doesn't charge properly?

One end plugs into the WiFi module and the other end is soldered onto a film antenna. If you see it loose, you’ve already cut the antenna off.

But that doesn't explain the charging issues, does it?

Where do I put the end of the cable on/in to?

It’s not related to charging. You’ve already cut the cable, so don’t attach it, buy a new one.

The charging issue is likely related to the dock. It's a super easy component to replace and test with. If that doesn't solve your issue, it could easily be an old battery failing. A little more tedious to repair, but definitely doable.