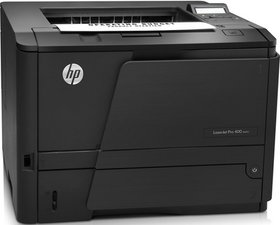 Monochrome laser printer introduced in 2012. The printer has a 35 PPM page rating and the first page comes out in 8 seconds. Depending on which model you own, you will have different expansion options and available features (Ex: M401n is limited to 128MB of RAM, despite having space for a memory module and a access panel). Uses HP 80A/80X toner cartridges.

What is causing the printer to squeak while printing? *With video*

I have an HP M401n here that I have had for ~3 years or so. As of today the printer began squeaking during a print job. I specifically hear this squeak a little bit while paper is being picked up (Tray 1 and Tray 2). This prominently happens during the fusing stage of the process, but is also present during paper pickup.

I have tried the following things:

Since this issue is reproduced on both cartridges, it's likely a printer fault. When I got the V4ink toner the 2 pack wasn't much more with a lower cost per toner. Because of that, I ended up getting the 2 pack. I am willing to use the other V4Ink toner in the 2 back I bought for testing, but this isn't ideal since open HP toner is hard to store.

Due to a small intermittent leak (along with the squeak), I changed the toner cartridge with my 2nd unit. The printer still squeaks.

I have now checked the MP tray gears to see if that had any obvious wear - it does not, nor do I see anything serious wrong.

I'd say try manually turning each part until it squeaks. on the squeaking one add lubricant.

The gears don't need to be lubricated. It seems to be caused by a worn out or loose gear. I just need to find it.

It turns out the problem is also caused by 2 chewed up gears. The problem is no amount of lubrication can repair that.

It's also in the worst spot possible. In order to replace these gears I need to do a partial teardown.

I mean, you still need to lubricate the replacements.