Recently I replaced the battery of my Early 2013 MacBook Pro Retina 15" using the fix kit and manual from ifixit. Reason for the repair was the fact that my MacBook started to go into sleep without notice at about 30% battery. When I plugged the laptop in, within seconds the battery charge would show 30% again. It had about 800 cycles, so I decided to replace.

The fix kit and manual were great, and the repair went smooth, but part of the problem stayed. My MacBook still goes into sleep without notice, be it with lower charge left (about 5% - 10%). Is this a software failure, or is there some component talking to the battery which could be faulty? 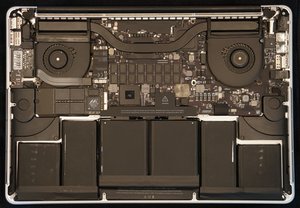 [edit on 2018-05-03] Added a screenshot of Battery Monitor at arbitrary notification percentage. 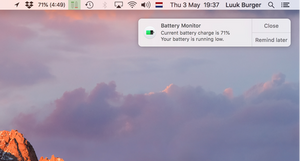 [edit on 2018-11-09] I just wanted to add a final comment to “close” this topic. I recently bought a new MacBook Pro and sold the one from this topic to someone with a shop for second-hand Mac’s who believed he could repair it. I recently asked him if he was indeed able to fix the problem, and he said he was. He just replaced my “new” battery for yet another new battery.

Obviously I haven’t seen it with my own eyes, and to me it sounds kind of unlikely that two batteries have the same problem, but I still wanted to share it here. It might just have been a bad battery problem…

Did you check your energy savings settings? Often I find after I do a SMC reset or replace a battery the settings need to be reset.

Thanks for your answer! I checked the settings and indeed reset SMC a couple of times already. Last SMC reset is a couple of weeks ago, because I imagined it has to "relearn" the battery's capacity and charge levels to be able to predict if it's going to be empty soon. Problem still persists though.

Did you follow this procedure: Calibrate & Maintain Your MacBook Battery For Best Performance?

Did this before, but I will try it again. Thanks.

SMC reset and battery calibration didn't do the thick.

Sounds like U8900 is failing on your main board from crappy factory soldering. Take it to someone who does board repair to confirm the issue.

Thanks a lot! I'll check the previous comment first, and otherwise I might follow-up on this... Don't really feel like motherboard soldering... Is there something I can see myself when I open it up?

On the back top middle of your board there is a chip that says ISL6288 on it. If it has never been liquid damaged or touched, more than likely your computer is going to sleep because of it. If it has any corrosion then all bets are off as it could be many things.

Been a while, but thanks @brady8812. The MacBook has always been treated very carefully, so definitely no liquid damage or anything else then regular use.

Found some time to open it up, and added an image of the inside to the question.

I don't understand where to look, so maybe you could point it out? I only see some "corrosion" on some screws along the top and left (of the image, that is). Is it at all visible with the plain eyes, without taking it apart further?

The chip is on the back of the board so you would have to remove it from the housing. It's a chip that says ISL6288 on it. Doesn't look liquid damaged, so my best guess would be the U8900 needs fixing. Check bio for somewhere you can send it if interested.

Thanks @brady8812. I live in the Netherlands, so sending it to US is a bit cumbersome. I'll see if I can find a party close by.

In the meanwhile I installed this app:

It also allows you to set a notification on a battery percentage. Just want to see if that does work. I'll report back here.