Replacement battery won't charge after it was depleted

I'm at a real loss here of what is going on with the MBP in my household. In December, the battery in this laptop puffed up, bent the bottom a bit and bent the trackpad up a bit. I ordered a new battery from iFixit and all was well (charged up, etc.) until the battery got to 2%. It would no longer charge. iFixit sent a replacement and the same thing has happened again.

Once the replacement battery gets low, it stops charging. The magsafe adapter shows green all the time and the computer shuts off instantly when removing the magsafe and boots immediately when the magsafe is plugged in. I have tried SMC/PRAM resets.

I have some screenshots (sorry taken with my iPhone and not actual screenshots): 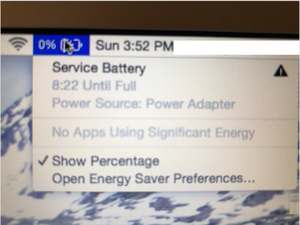 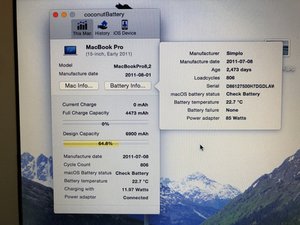 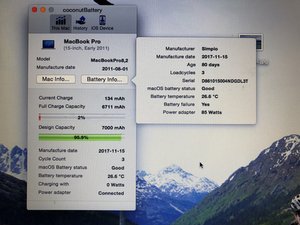 On the 3rd battery from iFixit with a production date of 9/28/2017 I have put 12 cycles on with no issues so far. It appears that the batteries produced in November had problems.

To be honest, I don't think it is iFixit's fault.

I acutally got 2 in a row bad from Amazon from different sellers (4 total).

It isn't the seller's fault.

I believe it is the brand you see at the top: "Simplo".

Unfortunately, this Q&A forum has no direct interaction with the store.

You will have to contact https://help.ifixit.com and let them know that this has happened.

I am wondering if this has something to do with the new 10.13.4 update and the firmware in the battery itself. Either way, let iFixit customer support know your experiences. They are very good at taking care of customers and dealing with their suppliers.

I believe the laptop is on the latest Yosemite version, not 10.13. I am in a catch 22 of upgrading though, as the depleted battery can’t support the laptop under load to do an upgrade (it powers off) and I don’t want to put a heavy load for hours on the puffed battery for safety reasons.

To add to the powering off, I stress tested the unit with the replacement battery with no issues for several hours when the battery was at a high charge level.

I did re-start my support interaction with iFixit, but I wanted to post here too as there are plenty of knowledgeable people on this forum!

Simplo is the brand battery Apple OEM uses. Sounds like either iFixit gave you two crap batteries, OR you have a different issue in regard to the battery charging.

After it happened the 2nd time I was definitely ready to place blame on the laptop, but the fact that it performs perfectly with the puffed battery back in makes me think it can’t be the computer.

If it recognizes the old battery and the light goes from green to orange, then there's a very very good chance you got another crap battery.

I’m having the same issue with Simplo made MB Pro 2016-2017 packs. There’s a rash of these on here that won’t charge that we’re all made in March 2019. I’m trying one from Amazon that is a different brand hopefully.