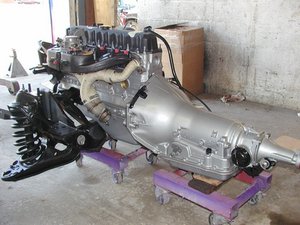 The TH (turbo-hydramatic) 700R4 was developed for use after 1982 in GMC and Chevrolet cars and trucks.

Why does my Transmission slip and buck in overdrive?

I have a 1984 GMC 2500 vandura with a 700r4 trans mission,I have noticed that while in overdrive only,that it seems to slip out of gear, or buck

(sorry best way to describe) is there an external control module? or is this problem internal?

You should first look into the simple adjustment of the TV cable. It is on the carburetor and can cause this problem.

That being said, the 3/4 clutch could be burning up and if that is the case, you are looking at a rebuild.

Check out this thread from another question for more info.

Mine did the same thing in my 86 K20. It started with 4th going out, then i lost third, deteriorated further to losing 2nd. And then reverse. It took almost a year for all that.

The good news is, there is tons of info and plenty of parts.

I had this problem on a 87 chevy s10 Blazer. I checked postings on the 7004r trans and found there is what is called "limp mode." If there is an unexplained increase in rpm (i.e. slipping), the safety features in the trans will by default go into the next lower gear so you can "limp" to a garage etc.

For a fix, I changed the trans fluid 3 times and used valvoline dexron vi for the last change. OD was still slipping so I adjusted the TV cable and made sure the fluid was topped off (engine in idle and warmed). I adjusted the TV cable by pushing the release button and pulling the cable housing to the rear and then pulling the cable to WOT. A thighter TV cable will increases the trans fluid pressure and makes for tighter shifting.

The TV cable adjustment I made also changed the shift points to hold low gear longer and down shifts faster. Overall, the shifting with dexron vi is smoother and more responsive and may have cleaned out some of the varnish deposites...however,