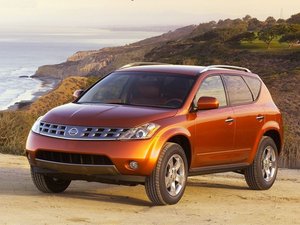 Repair guides and support for the first generation Nissan Murano, from the 2003 model year to 2007.

Just bought a 03 Murano took off the plastic that covers the radiator and found the radiator cap it was low on antifreeze I started filling it up and it was leaking on the right side of the engine I continued to fill with water to find the leak is think it's the oil cooler line easy to fix…. But now my oil has 2 gallons of water in the oil pan …pulled the plug and drained it out …now as fast as I put the water in it comes out of the oil drain plug…. please help thanks

Yes I have the same problem on my car.

Did anyone find a fix to this problem, I have an 07 Chrysler 300 3.5L Touring edition with the same issue. I changed head Gaskets 2 time and both times the coolant and oil mixed. I drained the third time and refilled the coolant reservoir to find out that the coolant was passing right through to the drain plug wtf...hoping someone has a solution km all out of ideas.

Driving in this condition is strictly verboten!

Do NOT drive it until the issue has been resolved. It will cause catastrophic engine damage.

If the vehicle ran fine prior to this, I would not lean towards a head gasket. If the water runs straight through the cooling system and into the oil pan like that, it has to have a severe internal leak and just topping off the antifreeze shouldn’t cause the leak to increase.

I believe it is most likely a failed water pump or water pump seal as these engines have an internal water pump driven by the timing chain. If the water pump shaft or seal fails, water will enter the crank case and mix directly with the oil. The shafts fail often with this design which I believe is due to the direct force and power delivered through the timing chain. My guess is you happened to catch this at a critical time.

It very well could be a blown head gasket, allowing a water jacket to cross over into an oil port or return. Some vehicles have radiators that serve a dual purpose of cooling oil or transmission fluid as well. They have been known to fail internally allowing the water to mix directly with the oil. But I don’t think your vehicle is equipped with such a radiator. It should cool the antifreeze only. The last item that comes to mind is the timing cover may have seals that need replaced as well if it has ports for antifreeze. As for the water leaking on the outside of the engine, this is likely a separate issue. Try your best to trace it to the source of the leak or ask someone for a hand, pouring water in while the other watches and traces back to the source of the leak.

stevelittlehope  “is think it's the oil cooler line easy to fix “ tell us more about this. It would have to be a pretty darn big leak in the head gasket to allow that much water to come out of the oil plug this fast. From what it sounds like you are actually filling water right into the pan. Could be an issue with your oil cooler line. We need to see more and need to get a better description about what is going on, from you. Post some good pictures of the top side of your engine/coolant lines as well as the bottom. Adding images to an existing question

In regards to your "... I started filling it up and it was leaking on the right side of the engine...." according to the service manual- engine cooling system for your vehicle there is a coolant drain plug on both the left hand and right hand side of the cylinder block as well as on the front below the water pump cover.

Did you check if the right hand side plug is OK? Go to p. CO-09 to view the locations of the plugs.

Also on p. CO-07 it has a schematic of the cooling system and if you are getting that amount of water into the oil system there may be a problem with the oil cooler itself.

I tried pouring coolant in my radiator and don't know why but left the oil plug out... and this is how I found the plug wasn't in... all the coolant went straight thru the motor into the crank case and into the floor 1st then i started catching it in the bucket... could be head gasket or manifold or timing chain cover.... or freeze plugs either way more &&^&^$^ work or an new motor....