The Mrs was using the iMac the other day doing her reports then all of a sudden the mac just resets, luckily she just saved her stuff minutes before in the cloud. anyway the system restarted and booted up again the apple logo come on with the loading bar underneath then the apple logo goes off and then just restarts again and kept doing this all the time. 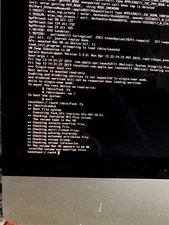 so after this I restarted, but still done the same thing.

now the system restarts hangs a little on the apple logo then the loading bar comes back on then it gets to the same point were it restarted but this time it just stays on the blank white screen.

Im trying to get back on the COMMAND S (single user mode) but nothing and tried all the other key combinations but nothing.

could this be fixed or should I just finally say goodbye to this mac.

thanks guys for any help you can give.

Is the bar stopping at about the 60% load mark?

@mayer yeah it stops around 60% then screen goes white and just hangs there.

This model had a recall on it for a while on the GPU.

I have one on my bench right now that I’ll have back together hopefully by Monday. I tried reflowing the GPU. This has worked for me about 70% of the time.

I’m also pursuing GPU replacement alternatives as the high demand for the replacement card has pushed prices up.

@mayer back in 2015 I had a problem with my system and you pointed me in the right direction. It was a gpu problem and was on the recall list to be replaced. Thanks for that. Please don’t tell me it’s another gpu problem

Carl, yes another GPU problem and a famous one to boot ;-)

Just a couple of thoughts. Try using USB keyboard to try and eliminate the regular keyboard as a problem source.

See the following link on how to boot into Safe Mode from a terminal if you manage to access "command S" again.

Yes this is one of the systems you do need a wired USB keyboard to access the start up options.

@danj Heh! Well there goes that idea then. Thanks for the heads up Dan. :-)

Hi prop man, thanks, I’ve had to borrow a keyboard from a friend but all the keyboard shortcuts still don’t work and now looks like I’m completely locked out of the COMMAND S now :(

Are you able to reboot the system and this time enter into the onboard diagnostics pressing the D key?

Reference: Mac startup key combinations If you can let us know what the error code is.