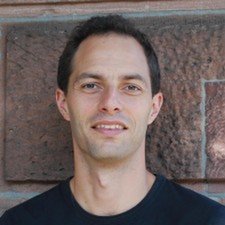 This problem is afflicting my mid-2013 MacBook Air Core i5 1.3GHz

The MacBook Air will power on *only* when no battery is connected, and then it does not power on when the power button is pressed. Instead it powers on when a power supply is connected - when doing this with the bottom case removed the fan starts for a few seconds, stops, starts again for a few seconds, stops, and then on the third attempt the MacBook starts up. Without a battery connected its behaviour is then otherwise normal - everything works.

I have reset both SMC and NVRAM multiple times, and tried all of this with two different batteries - and it is the same all the time.

I hence presume this is a problem with the SMC and there is no option other than to take it for a professional repair?

Any assistance here would be most welcome.

UPDATE 1 - in light of Dan’s comments below, here is the screenshot from Coconut Battery 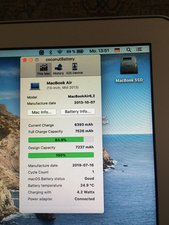 UPDATE 2 - @danj OK, so I have tested and re-tested this, and it is *not* a problem with a faulty battery. I ordered a second hand Apple battery and this exhibits *exactly* the same issues as the two other batteries I have tried, and with the Apple battery as well calibration makes no difference.

This problem is either connected to the SMC or the charging circuits of this MacBook Air.

The closest equivalent problem I have found is this Strange Power Supply Behaviour faced by @karthikrr and diagnosed with @arbaman. I have also tried following this Does not power on after SMC reset, will on SMC bypass.. but that SMC bypass route does not work either.

So we need to look elsewhere to solve this.

First, the I/O button does respond to pressing it - when pressing it when the MagSafe is connected, the LED on the MagSafe switches from orange to green for a few seconds, then back to orange. Also if you do get the computer to boot (by disconnecting the battery and starting it by plugging in the MagSafe) and then when it is running you press the I/O button, the machine goes off *immediately* - it does not give you the Restart / Shut Down menu as it should. So there is something odd there.

The question then is what I could try next? Apple Hardware Test gives the error PPT004 saying the battery is suspect, but we now know that is not (at least not the battery itself) the case. Is there some way I can diagnose whether the SMC or the charging circuitry is faulty?

So - a couple of months on - I managed to source a new logicboard for the MacBook, installed it, and everything works perfectly. The answer to @danj is clear - the fault is with the logicboard. I have now sent it off for repair, and we will see what the company says - I will post any conclusions here too.

An inspection of the logicboard shows what looks to be light corrosion as shown on the pictures here: 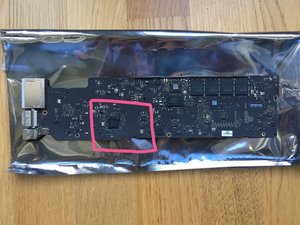 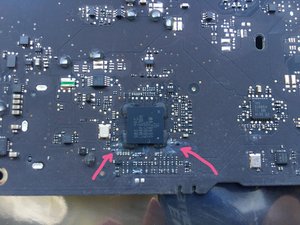 You may have jumped the gun here. The battery looks OK at this point. The battery doesn’t charge at a fixed rate. Depending on what the SMC has set as its levels (high & low) the battery will be charged at different rates as it becomes full.

The other variable is the temp of the battery! As the battery is charged and discharged it gets warm. You don’t want to charge the battery at a high rate when the battery is warm! This is when many batteries fail. The built-in thermal sensor and micro-controller fails to communicate to the system and/or the systems charging logic fails to slow the charge rate so as not to cook the battery.

So with this small view the battery is OK, that doesn’t mean its good! You’ll need to see what happens when the battery is below the halfway point of charge. You also do need to make sure the set points held in SMC are reset. Did you follow the calibration procedure?

While Apple has stopped doing this I still recommend doing it. Apple view is the system will just go into sleep mode and over time the set point will correct them selves. While this is true! It does create issues for though’s who need a fully working system vs a system which is limping a bit at the get go.

@jonworth - At this point I think you need to get your system to someone who can trace out the logic to figure out if the issue is logic board or keyboard.

Thanks for this, but this does not quite answer the question. I will proceed as follows: I will run the battery down below 50%, and then re-attach the charger, and see what happens then and at what wattage it will then charge.

This also does not explain why, when *not* connected to a power supply, the Mac fails to start. But once it has been started it nevertheless does continue to run once the power supply is disconnected.

@jonworth - Follow this procedure to calibrate your battery Calibrate & Maintain Your MacBook Battery For Best Performance As I gather you hadn't.

I am in the middle of doing that (I started an hour ago) and I will report back once it is done.

Also meanwhile further to the points above: the battery behaves at 45% exactly as it does at over 90% - the MacBook will NOT boot with the battery connected, whether the MagSafe is connected or not. The only way to make the MacBook boot is to disconnect the battery.

I will try all this once more once the calibration is finalised.

I am trying one final thing: I have ordered a second hand but original Apple battery from eBay and will try it with that to see if that makes any difference. I will report back on that once that battery has arrived and I have had the time to install it and test it.