EDIT: Here are the photos requested. 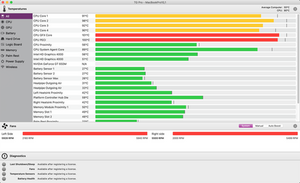 I’m running a Early 2013 Macbook Pro Retina 15”. It has already had the old thermal paste taken off and replaced with new paste. I have also opened up the back of the Macbook and sprayed out all of the dust particles I could see with a compressed gas duster. The only possible fix that I could think of at this point is replacing the heatsink, but I came here because I do not know enough to say whether or not that would possibly fix this issue.

In addition to running much hotter than any Macbook Pro Retina I have ever seen or owned (which has been at least 5), the fans go on full blast when it hits around 85-90°C. I know this may not be considered running too hot, but the macOS considers it to be so (and I have seen the fans start to kick in around these temperatures on other similar or same Retina models when the computer is putting out a lot of processing power).

The odd part about all of this (if it didn’t already seem off) is that it happens almost immediately after starting up my Mac. Ever since I did a complete uninstall and reinstall of the macOS (since I bought it used), it has done this. So I’m sure it’s not a virus issue or anything else along those lines. I do not use this laptop for much more than browsing the net or watching videos, but I would say about 95 percent of the time it’s used to navigate Google Chrome.

Any advice or suggestions based on experience or knowledge pertaining to this matter would be greatly appreciated!

Lets get a better idea on what you have for thermals, install this great app! TG Pro with a cold system snap a snapshot of the Apps main window making sure all of the sensors are visible (you may need to adjust the window size so the ones at the bottom are visible in the snapshot). Take a second when you've run a hard running program as well post both here for us to see Adding images to an existing question

You may also want to run your systems onboard diagnostics. Restart your system and press the D key to enter 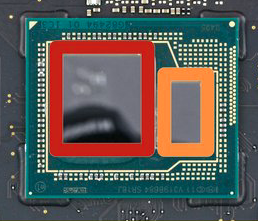 The Red is the CPU the Orange is the 128MB eDRAM L3 cache.

This is what a similar iMac CPU looks like 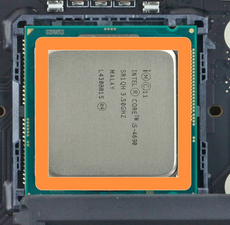 Hey there, sorry for the late response.

I have uploaded the requested images, as well as attempted to restart my system and go into the diagnostics section. Pressing the "D" key upon restart instead took my into internet recovery mode, so. I didn't receive any other information than you are seeing.

Any suggestions from here on out?

@meeceit - Well I think I see your issue! Your heatsink has failed! Note the Heatsink proximity temp is is only 43ºC where as your CPU temps are 91 ~ 101ºC !! Early 2013 HeatSink You'll also will need to refresh the thermal paste. Make sure you don't over do it! keep it on the silicon chip, don't let it get onto the carrier. A little goes a long way.

I would have liked to see the onboard diagnostics are you sure you pressed the correct key?? What is your OS version as that's the only thing I could see here if you are running something really old like OS-X Mountain Lion (10.8.3)

That was my guess, so I appreciate you confirming that! I was just surprised because from what I have been reading, heatsinks themselves generally do not fail. I already applied some thermal paste, so I will make sure to wipe what I just applied off (when I say 'just applied', I mean within the past few months, but I have barely used the Mac since then), and replace it with more.

When you say to keep the thermal paste on the silicon chip and not the carrier, I also assume you mean to not apply it to the heatsink itself, and just the chip?

Lastly, I tried twice by pressing (or rather holding down) the D key on the keyboard, and I am running macOS Catalina 10.15.7.

Again thank you for all your assistance!

Your heatsink has liquid inside to transfer the heat to the fin area, here the liquid has leaked out. So the tube wall is all that you have to move the heat which is not enough so the chip sensor and the fin sensor temp difference should be closer together.

Sounds like you'll likely need to be more aggressive on cleaning as the paste is fresh already. What I find is people use a paper towel to wipe it off, which just plows it onto the carrier (not good) I would use a couple of plastic razors to scrape it up from the sides to the middle (pushing each from the opposite side to the middle) to scoop up the paste.

If any paste has gotten onto the carrier use a cotton swab with some 85% or better isopropyl alcohol to wipe it up. Use care in wiping around the SMD devices on the carrier as you can easily pull them off!

You will likely will need to use a chargeable spray can to clean around the small SMD devices on the carrier to fully clean the paste that's stuck around them. I use one of these True Power Rechargeable Sprayer. Using the snorkel tube with the isopropyl alcohol you should be able to clean them fully.

Thank you! Can you answer my questions that I have listed above as well, in addition to what a carrier is. I appreciate it!