Screen on but no backlight - Why?

This MacBook Pro logic board (820-2530) seemed to be water damaged, I cleaned it up took some readings as it had no power,

I found out the 18.5 G3H line was incomplete and one of the MOSFETs (Q7000) from boardview file was missing a leg.

Online tutorials show that if you short the drain with the source you will have voltage at the gate. I tried that but had no luck, after digging deeper i noticed on the schematic this is a critical component and even though it acts as a switch, the gate voltage will not be present without the component so i ordered it from China via Ali Express and thankfully it got here quick.

The model number for it is HAT1127H. The old component was missing a leg and the pad is half peeled off the board, i fixed the pad and placed the new MOSFET and the laptop booted up with the chime. However it has a Black screen I tried the board on another working screen but was getting the same thing. I then saw online a similar problem with a solution that says it could most likely be the discreet GPU and theres a way to bypass the discreet GPU chip (AMD) to the intergraded graphics engine in the CPU chip (Intel 3000 or something along these lines).

I was about to begin that until I discovered this is a problem with the backlight circuit. 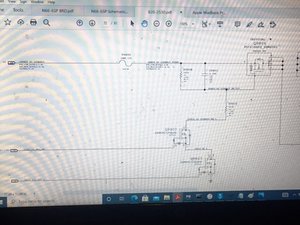 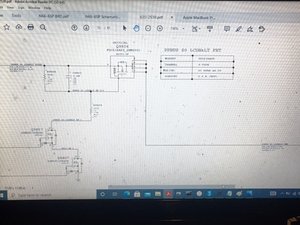 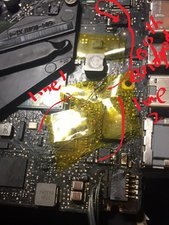 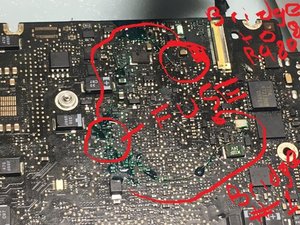 From an online resource I found an adaptor that is mini display port to HDMI and connected to my TV where I got a picture. So then I started testing the backlight circuit and shined a light on screen to find out I have a picture with no backlight.

I found a tiny fuse missing (F9800) I decided to remove the fuse out of another board similar model MacBook Pro logic board (820-3115b) F9700 which is 32volts and 3 amps which is close to what I need. I bridged the fuse to the tiny resistor from one side to (R9808) and the other side is suppose to go to Q4260 pin number 4 (that’s where I connected it) where then the resistor R9808 other side connects to capacitor 9802 (C9802) which looks burned and missing one contact side as the fuse was missing originally I’m guessing the circuit burned out and damaged the capacitor.

The capacitor from board software shows it is connected to the other side to MOSFET Q9806 pin number 3, which the other side of capacitor then connects to resistor which then connects to pin 4 of the same MOSFET Q9806. where Q9806 is like a switch where pin number 3 and 4 get voltage in and pin 1,2,5,and 6 is voltage out. so dealing with tiny components it would be difficult to run a bridge from one side of the board to the other side when Q9806 MOSFET from schematics gets approx 12 volts and missing both lines on pins 3 and 4 because of the missing fuse (F9800). So I used the G3H line to bridge Q9806 pin 3 and 4 with capacitor C7561 to run jumpers from the capacitor G3H end to pin 3 and 4 of the MOSFET Q9806 .

I have tested my progress with the 3 jumpers I placed on both sides and all are connected connecting the right voltages, the board boots up and the fan spins but still no backlight, I now have input voltages on pin 3 and 4 of the MOSFET but nothing coming out and pin 1,2, 5, or 6 on Q9806 MOSFET. if the MOSFET was to work then the voltage would travel to MOSFET Q9807 which will lastly go through U9701 IC and give out the backlight voltage to pin 21 and pin 22 of the LCD connector (J9000) which is responsible for the backlight.

Am I on the right track here? What could be wrong is there anyway of testing the MOSFET Q9806 without removing it and removing the two jumpers I made. How come I’m not getting voltage out?. Is it possible a tiny capacitor or bypassed tiny resistor can change the voltage sent to the MOSFET slightly and cause it not to function? On the schematic it don’t show they are critical. Here is a picture of the jumpers I soldered on so far, and a picture of the schematic MOSFET circuit to support my analysis to make those jumpers.

Any help is greatly appreciated thank you.

The first jumper placed on the first side is in replacement of the blown out fuse which corresponds with the logic of the schematics as the fuse one end is connected to R9808 and the other end goes to Q4260 which is correct according to schematics and board file.

The input and output of both MOSFETs are 12.6 volts which is  equivalent to G3H and G3H passes through one of them through R9808, however the MOSFET Q9807 uses double switch was throwing me off.

I revisited the schematics and reread it more thoroughly, it seems that Q9807 gets input before/simultaneously with Q9806 and the resistor beside the blown fuse R9808 was damaged which shows the circuit path its self is damaged as well as the capacitor beside it C9808 (was initially missing an end) which are caused by backlight burning out as well as there’s burn marks on pin 21 and 22 of J900 connector which are responsible for the backlight but they are still intact as the major burn area occurred around the fuse which is why this Macbook still has life in it and it makes sense as the fuse one end is connected to G3H.

I replaced a G3H power line MOSFET HAT1127H referred from my previous comment that I mentioned had a missing pad and a leg as the blow out continued through G3H path and also blew the fuse and the tiny resistor and capacitor and the traces that join them as these 3 are very close to each other. I removed the resistor and capacitor to confirm my analysis to find burned out pads on one side of each of them, the same side the capacitor was missing an end both adjacent to the fuse which also has burned marks on both ends on missing pads while component is missing. I need to do heavy surgery on this board as the SMC power management IC is located right behind this mess and CPU is also close.

To be honest I bought this laptop and a couple more Macbook’s from an online community auction and it it had half of the screws and had some type of colorful liquid on 1/3 of the board. Guessing it may be a community auction that buys from the licensed repair shops and had liquid damage during storage as its from outdoor locked storage.

Here are the pictures of the board to show you what I'm talking about, picture one shows burned pads for capacitor and resistor and fuse, the resistor pads I’ve fixed the one end by scraping off the board and re-soldering to the copper. I'm having a hard time finding a similar resistor tho. 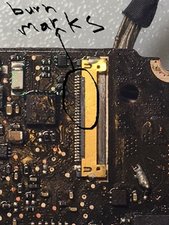 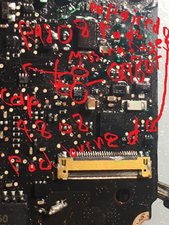 ....Now it makes sense why the backlights not working because the burned end of R9808 goes to the MOSFET Q9806 and that provides the enable line to power on Q9807 and communicate with Q9807 as some of the input lines for Q9807 are present which are the PCI reset line coming from the CPU as well as the backlight LVDS enable line.

However my question is that can I bypass R9808 with a simple wire, on the schematic it doesn't say it's critical however according to ohms law V=IR where V is the Voltage and I is the current and R is resistance and this resistor r9808 is approximately 308 kilo ohms which means 308 000 ohms so if we have 1.5 amps of current going in then approximate voltage would be 1.5*308000=462000 volts and if we add a wire instead of the resistor to bypass the resistor with any AWG, the average resistance is less than 20 according to an online wire resistance chart, so according to ohms law the voltage would be approximately 1.5*20=30 which would cause serious damage to the Macbook as Q9807 is a tiny double switching MOSFET that I can only find on this model MacBook Pro and it would be very difficult to find such part.

However logically I would think its critical according to me because it’s seems the double switch MOSFET needs to make a voltage input variable to create and input line to activate the second half of the MOSFET. I think the board is designed this way with the resistor to manage the voltage going through the MOSFET otherwise g3h would have been used to connect both sides to activate the MOSFET.

On the other hand my initial misunderstanding of the MOSFET I have made a mistake of placing the one jumper on the other side but luckily no damage has been done as the data sheet for q9806 shows all sides are capable of handling 12 volts and i don’t have a short upon booting the laptop.

Injecting power without understanding the logic I suspect is the root issue here. The MOSFET is part of a Buck inverter circuit to boost the voltage Buck Converter: Basics, Working, Design and Operation

So when you bypassed its operation by directly injecting G3H I suspect you failed to conceder the rest of the logic. I would check the caps and inductor as well as the traces if you have a liquid damaged board you shouldn’t need to make so many jumpers to get this to work.

At this point I would replace the logic board LVDS connector as it still looks like it has damage.

Given its history does it make sense spending so much effort on this board instead of using it as a parts board to fix your other boards in the other systems you have?

The connector readings are OK as the connector is the output, the culprit is the input according to schematics is R9808 the fuse and the capacitor which noted earlier goes through the two MOSFETs Q9806 and 7, it outputs the power line for backlight Q9701 which then gives the backlight enable line to the u9701 backlight driver IC that outputs to the LVDS connector.

It should work once I reconstruct the input side I may eventually change the connector for looks. The other boards I have repaired I already one working nice the other spent lots of hours on it diagnosed and needs a SMC re-ball, after a lot of researching and online tutorials and successfully removed just to find out that the stencil for SMC is extinct (no where to be found from legit e-commerce).

Yes repairs can get iffy especially when the Apple product is not even supported any more, parts not available and broken apple products price sky high. a broken MacBook online e-commerce goes for 150 and a fixed MacBook goes for 180.

However your first response lead me to the right path of revisiting the schematic and determining the exact cause of the problem thank you, well i spent a lot of time to get it running it would make sense to finalize it soon reconstructing backlight circuit wont be fun lol