Didn’t think I could do anything about those fan cables, so I closed the laptop up and started charging the battery. Got to 100% and the computer was running as expected. Then I followed the directions to discharge the batter fully. Unfortunately, the computer will not boot. No amount of holding the power button works. I can however hear the fan trying to spin up. It clicks on for about 1 second, turns off and repeats infinitely. Also, charging the battery hasn’t resulted in the green light turning on at the magsafe plug since disharging fully. I would have expected the battery to be charged by now. Is the batter bad or are the fan plugs preventing booting? 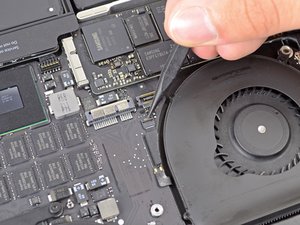 Damaged cables is not good! Post some pictures so we can see the damage Adding images to an existing question

From the sounds of it you managed to fully discharge the battery and your battery is not charging. When you plugged in the MagSafe charger the connector LED color should be Amber and once allowed enough time to charge turn to Green. Did it?

Maybe I mispoke...the ribbon cables are not damaged. The plugs that hold the cables now have issues. One has the clamp/bar broken off and the other probably has a pin that is disconnected.

As far as the charging, the amber light has been on for over 12hrs. Doesn't seem to be going to green. So, not charging? Is it possible to fix? Do I need a new battery?

@bobeinstein - Please post some pics so we can see the damaged connectors on the logic board.

You won't be able to see anything from pictures I would be able to take. I borrowed the image from the guide to show the plug type I am talking about. The picture shown has the little plastic bar that holds the ribbon cable. That is broken completely off on one plug. The other plug is the same kind but the problem is different. The bar is fine on the second plug, but some of the metal inside the plug (basically a super thin piece of wire) for one pin came out when I removed the cable. The plugs are still on the board with the ribbon cables inserted into them.

If the bar/clamp for the first plug is required for contact to complete the connection, that one likely isn't functional. The second plug probably has one pin not working, which most likely makes it non-functional.

The issues with the fan plugs notwithstanding, I don't know why the battery no longer seems to be charging. Also, it doesn't seem like the laptop would fail to boot even if both fans are off.

The connection that is missing a pin needs to be removed completely. If its not connected properly it can lead to all sorts of issues. Power and Battery and booting up are the main ones.

A broken camera cable connection once stopped my entire macbook from booting. As soon as I removed it, it was fine, minus the camera.

Don't leave anything connected if something broke off of it, even if it is a piece you think irrelevant.

The macbook generally has to run through all its components during boot up and its likely getting stuck on the fan missing part of its connection, This can absolutely cause your Mac from booting and from charging. A power issue anywhere is a power issue everywhere.

As long as the body is not damaged you can replace the compression latch! Here’s the needed part Fan/Microphone Connector (5 Pin)

The trick is to bow the latch just enough to slide in the second side. You may want to get a few incase it jumps out of your hands to the floor or if you bend it too much.

How are these plugs attached to the board? If they are soldered in, I think I'll probably pass on these...

@bobeinstein - I guess you missed the point you'll get the part and then pop the latch portion off and then snap it onto your logic board connector. No soldering involved!

I don't think this is very doable. I did buy these replacement parts, but putting the latch onto the logic board connector doesn't seem to be working. These parts are very small and even with tweezers and other tools, I'm not having any success. There's probably no other possible solution without soldering, but I don't think this is likely to work for 95% of people..

@bobeinstein - I've done it a few times without any issues, fixing systems people messed up. Maybe it would be best to find someone local with Mac repairing experience. Maybe they will have better luck. Desoldering the connector is not easy! I would find someone who has good micro soldering skills.