As stated above, my battery purchased from iFixIt has 82.2% capacity left on it after 49 cycles & 683 days. According to Apple's Battery Cycle Counts the battery of a MacBook Pro (Retina, 15-inch, Early 2013) should be 1,000 before it starts to go below 80%. I understand an aftermarket battery may not get cycles up to that level, but shouldn't it still be at least 90% capacity?

I just downloaded CoconutBattery, so I don't know what the battery has looked like over time. I only noticed today because I'm looking at upgrading to a new laptop and selling this one to a friend. I want them to be informed of whatever the condition is, in case they need to expect to re-replace the battery soon.

I don't leave it plugged into the charger, though sometimes if I don't use it for long enough it needs charged a bit before it'll power up.

Edit: As of just a few hours later the battery capacity/health now says 79% 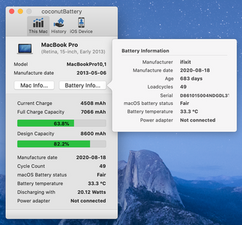 It's 683 days, cycle count is not the only thing that causes the battery to degrade, it can expire just on its own.

To add to Tom's answer: The state the battery is in when you let it sit unused also has a bearing!

We don't want the battery charge state fully charged nor do we want it totally discharged either! Using CoconutBattery if we break the Fully Charged thermometer gage into quarters we want the battery to be within the lower area of the second sector from the left. This is the space you'll see most Li-Ion batteries are set at when new.

If you don't do this you will wear out the battery sooner!

If one leaves uncharged a lthium battery for a few months, chances are even a 6 months old battery will be ready for recycling. 49 cycles only in 22 months means your battery has been used very little and unless it was plugged to mains all the time, it may have gone flat of power and started deteriorating. Unfortunately Macs have always on power lines that consume little energy, but steadily. Ideally, one should make sure at least once every couple of months, to charge battery at 70/80%.

Sounds plausible. But who competed 1000 bettery cycles in 683 days?

@Lu Yin - There is a misunderstanding between cycles and a worn battery. The OP did not burn 1k of cycles here.

Think of it this way… A book binding can be opened multiple times but there will be a point it will fail. But that’s not the health of the book only how often it’s opened.

The health of the battery is more complex as it’s how much power is accessible from the battery. This gets into the breakdown of the batteries chemistry. Cycles is part of it, age is as well! And how you store and use your system.