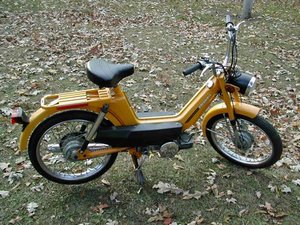 Columbia mopeds were made by Columbia Bicycles, which is claimed to be one of the very first bicycle manufacturers in the United States, dating back to 1877. The mopeds even sported the same logo as the bicycle company. Columbia mopeds were the first mopeds ever assembled inside the U.S., even though the parts and motor were not made there.