How to Repair an Apple AC Adapter Broken Cable 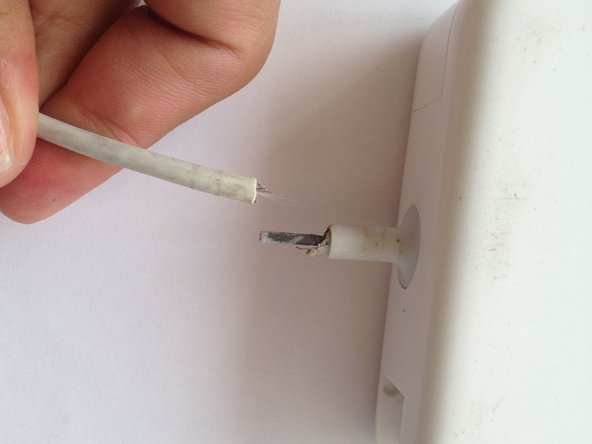 Sometimes the cable starts peeling just at that place where it meets the AC Adapter. I've met too many people that throw away their chargers because of this. It takes time and patience but repair is possible!

* There is a better way to open the enclosure without damaging the edge: using a pliers to push the two sides apart where the bunny ears lift up (google for videos).

* The cable can actually be threaded through the rubber/plastic grommet if you have the patience to remove the broken cable from it and make the two small holes bigger with a drill bit. This can be frustrating but is the only way to keep the original appearance. Be sure to leave enough cable after the grommet for soldering.

* Thin (2-3mm) heat shrink is a good way to insulate the exposed wire after threading it through the grommet.

* If you trust your soldering skills, consider de-soldering the old cables from the terminals.

* Applying a little super glue along the edge and clamping for a few hours is all that is needed to keep it closed permanently.

Thanks for the tips! If you have pictures of the processes please feel free to modify this guide (especially the opening of the enclosure!) ^__^

* I did consider de-soldering the old cables but that involved de-soldering other components that are attached to copper plates to get to those terminals. In earlier versions of the AC Adapter this can be done with not so much trouble.

I really appreciate your feedback! Thanks!

I didn't try that... We actually ended up just heating it to soften the plastic and that worked, wouldn't advise it though

Same for me, don: see this as a much easier way to open the case: https://www.youtube.com/watch?v=Yqa9uUKu...

Would be nice if you refer to this solution as alternative, befor starting to cut the case.

Thanks for the manual, I just fixed it!

Is it possible to remove the cord entirely from the circuit board and solder new replacement? I have ordered a replacement and I wonder if its safe to do so? Thank you for your prompt response!