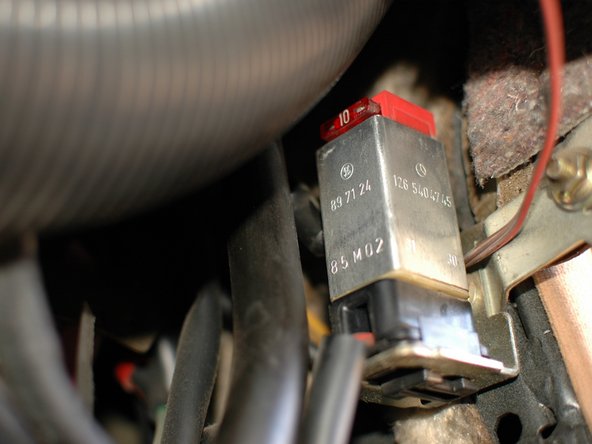 Only installed on a small portion of W123 cars, the over-voltage protection relay can be a bit of a mystery at first. In reality, however, it's quite simple.

While most or all of the electrical systems on all W123 cars are protected by metal fuses, these are designed to trip only with excess amperage. For example, the blue 25 amp fuse for the climate control system will only blow if the system draws over 25 amps due to a short or other problem.

However there were some new components added to the 1984 California model, and all 1985 models, of the W123 that needed protection from over-voltage as well. One example is the new computer that controls the EGR.

A the time, the best way Mercedes had to protect these items was with the over-voltage protection relay (the OVP relay). This setup allows a fuse to function as a voltage protector. It works by using a relay that monitors the voltage across the electrical system in the car. If the voltage exceeds a certain level, the relay shorts itself internally, which draws an excess amperage on the integral 10 amp fuse on top of the relay. This blows the fuse, cutting of current to the sensitive systems.

One of the easiest to recognize symptoms of a blown OVP fuse or bad OVP relay is that the tachometer will not function. In addition, the A/C compressor will not engage.

First try replacing the fuse to see if the blown fuse was a fluke. If the new fuse does not fix it or blows again quickly, you may need to replace the relay. This guide covers both.

By the relay under the hood..thanks in advance