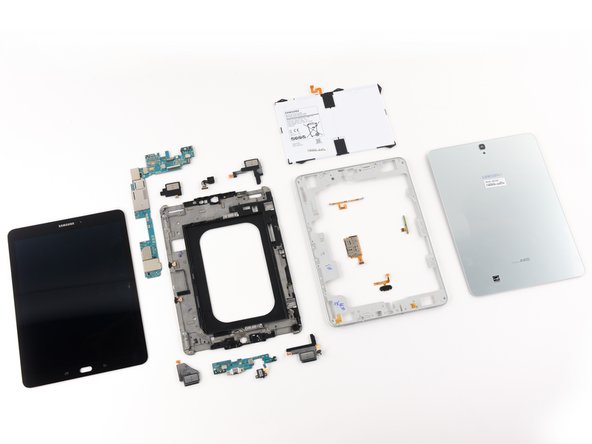 In order to replace any internal components on the Samsung Galaxy Tab S3, both the rear case and front panel must be removed. Both of these parts are secured by strong adhesive, making it a headache and yielding a repairability score of 4 out of 10.

Thanks iRobot for the very great information

Is it possible just to change the glass of the display? My item is broken but the display is ok and still working.

One repair shop told me that the touchscreen is not separated from the glass so I have to pay like 400 $ for a new screen !!!

My samsung is a 9.6 SM-T567V my husband change my cracked screen but now the tablet dot come

Question: my back glass is cracked 3rd day. 1. Can I order a new back panel. 2. Can I just scrape the cracked glass off, and if so should I use a lot of heat, and if I do, should I remove it first? Any other suggestions about this?

Thank you for this detailed guide on opening up the Samsung Tab S3 tablet. I’ve been having issue with the video display not working correctly. Sometimes it would boot up with no video display. Sometimes after it booted, half of the screen with scroll and half would not. I think mine has a video cable loose inside or something.