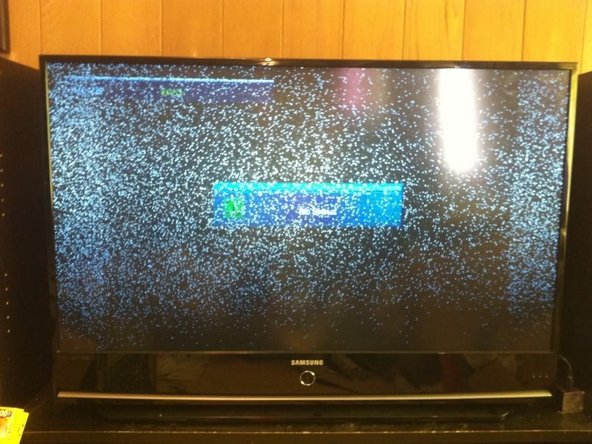 The DLP chip in your Samsung television is a very fine piece of technology. Texas Instruments describes it as such:

"A DLP chip's micromirrors tilt either toward the light source in a DLP projection system (ON) or away from it (OFF). This creates a light or dark pixel on the projection surface.

In this way, the mirrors in a DLP projection system can reflect pixels in up to 1,024 shades of gray to convert the video or graphic signal entering the DLP chip into a highly detailed grayscale image."

When your chip begins to fail (from age or excess heat) these microscopic mirrors stick either on, or off. This can lead to spots on your TV, either white ones (for those mirrors stuck in the on position) or black ones (where the mirror is stuck off).

Usually this begins with one mirror. You'll notice a white or black pixel glaring at you while watching your favorite high-def movie. Slowly, as the chip continues to fail, the spots will spread across the TV until your movies and television are almost un-watchable.

The great thing about owning a DLP television is that many of these parts are readily replaceable. The DLP chip is one of those items. Learn how with this guide!

Note that the Samsung TV uses the same Texas Instruments chip across a number of models, and with some Mitsubishi and Toshiba DLP televisions. Make sure the chip your are buying matches the model number of your TV.

Perfect guide!!! I just used this and replaced chip in less than 45 minutes and now working perfectly!! Only suggestion is that I used sticky notes for each step and the corresponding screws/parts. Made it very easy to put back together. Thank you!!

Great! Glad it worked, and good idea with the sticky notes. Keep it up!

This is about as good as a guide can be . This problem just started for me .Glad i found this !

Glad to hear it Chris!

where do you buy the part?