Guidelines for creating a Teardown

Guidelines for creating a Teardown

Use this set of guidelines to successfully create your very own teardown!

What is a teardown?

Teardowns offer the world an inside glance into hardware, gadgets, and gizmos of all kinds. Merriam Webster defines "teardown" as "the act or process of disassembling."

Back when iFixit was started, we decided to implement our own in-house image editor/uploader instead of using off-the-shelf software. Over the years that software has developed into a fast and efficient way to generate teardowns. Over the next several years, customers emailed us asking how we created the teardowns, and if they can contribute to our teardown database. We realized the importance of releasing this platform for everyone, so we spent the last year and a half developing it for user access. You are now able to enjoy this tool, free of charge, to create any teardown you'd like.

We created a guide that provided a bunch of tips on taking pictures properly, all while installing a guitar string. You can use this guide to figure out how to take teardown pictures like a pro, as we employ all these tips on a daily basis.

The majority of cameras on today's market take pictures in 4:3 ratio. If you have a "point and shoot" camera, chances are it's a 4:3 ratio. We designed our image editor system based on the premise that most of our users will have a point and shoot type of camera, as opposed to a less-common SLR (which takes photos in 3:2 aspect ratio). The image editor allows users to upload images that are not in 4:3 ratio, but requires them to be cropped to 4:3.

Users with SLR cameras have several options to crop pictures:

Note: Use caution if you do decide to use a batch processor for cropping images. Important details may be lost on the sides if the image is cropped too much.

Uploaded images should be at least 800 x 600 pixels in size. Images smaller than 800 x 600 do not provide enough graphical detail to adequately show the task being performed.

As a general rule of thumb, upload images as large as possible so users can zoom in on the photo and see fine details. Large images take longer to upload, but the end result is worth it. You can upload images that are the full resolution of your camera (up to 10.0 MB per photo).

Our image uploader requires Flash and Javascript to work. (Yes, we don't like Flash either, but it's necessary to allow you to upload multiple images simultaneously.) If you have problems uploading photos, post your browser version, Flash version, and problem to meta.ifixit and someone will help you out.

Teardowns are not substitutes for take-apart guides, and should not have as much markup. You can omit steps during disassembly, and you don't have to add markup for every screw you remove.

Markup should be reserved for interesting or tricky portions of the device disassembly. Some intrepid souls do use teardowns to give them disassembly hints, so try to point out any points of possible danger.

The text you write will be viewed by thousands of people. Make sure to write as clearly as possible and to proofread your posts before making the teardown visible to the world. Please do not curse or use racial/sexist slurs to highlight your work.

Bullets are used to correlate the guide images to the guide text. There are several different bullet styles, showcased in the image below. 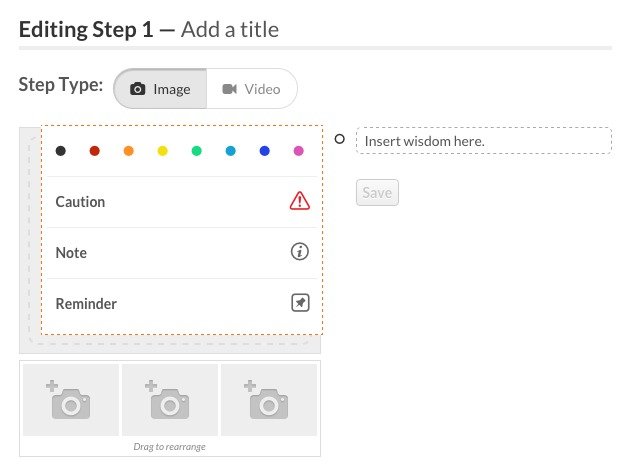