The phablet war rages on. Close on the heels of Apple’s 5.5″ iPhone 6 Plus, Google brings us the 5.96″ Nexus 6. With the similar shape and size, we’re calling it the 6 Plus’ brother from an Android mother. So aside from upping the ante on screen size, how does the Nexus 6 stack up against Apple’s latest offerings?

The Nexus 6 is a solidly built phone, with high-end specs but not a lot of flashy new tech. It looks like repair was a consideration in the design, but not the top priority—while there isn’t anything seriously trying to keep you out, you do have to bust through a few inconveniences in the layout to get anywhere. As a result, the Nexus 6 matched the iPhone 6 Plus’ respectable 7-out-of-10 repairability score, albeit for different reasons.

• Under the moderately adhered rear cover lies a midframe secured with an absurd twenty-two T3 Torx screws that silently await our precision driver.

• With cables decoupled, it’s suddenly delightfully apparent why there were so many screws in the midframe. The Nexus 6 practically falls apart into two halves; the midframe/battery assembly, and the display/motherboard assembly.

• A shiny copper coil caught our eye through the holey midframe. Turned out it was an inductive charging coil. Peeling the coil off lets us get a look at the 3.8 V, 3220 mAh (12.2 Wh) battery. It’s a notch above the 11.1 Wh iPhone 6 Plus unit, but apparently the battery life doesn’t benefit much. 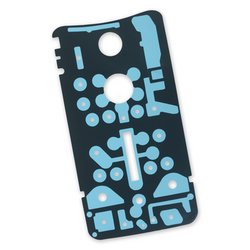 This custom cut adhesive film secures the rear cover panel to the back of the Nexus 6. 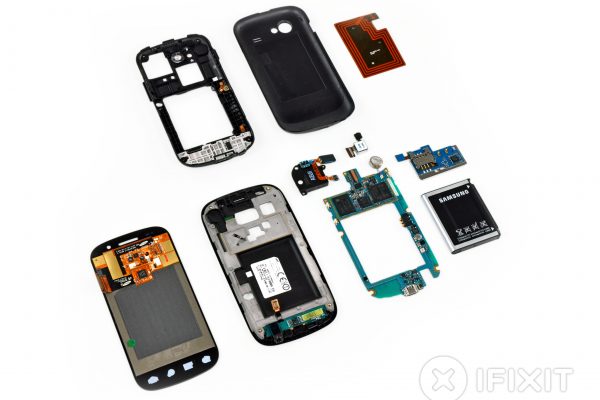