Get a new battery for your First Generation Moto 360 Smartwatch and bring it back to life! 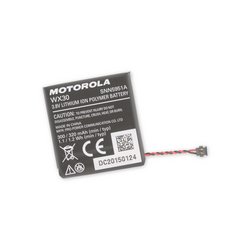 The 1st generation Moto 360, announced in 2014, is an Android Wear-based smartwatch from Motorola Mobility. Its software displays notifications from paired phones. It uses paired phones to enable interactive features such as search, navigation, playing music, and integration with apps.

Most Moto 360 repairs are made to swap out dead batteries. iFixit has high quality Moto 360 battery replacements.

Once you've bought your parts and tools, check out iFixit's Moto 360 repair guides for step-by-step instructions on how to make the fix.