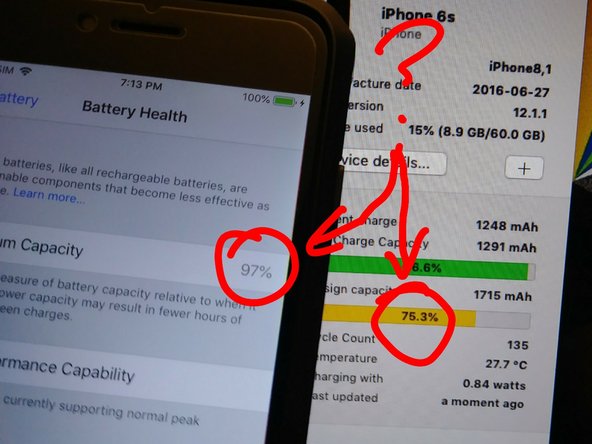 I noticed that my screen was (very rarely but still annoyingly) clicking on random things. I reseated all the cables, but that did not fix it. So, I went ahead and bought a screen on iFixit thinking "iFixit is a very trustworthy and reputable parts seller!" Boy was I wrong! (More in a moment.)

The screen created more issues than it fixed!

The repair was simple and straight forward. However, upon starting up the device, it shutdown and started again. TWICE. When it finally started up and I put in my passcode, I was prompted with a message informing me that Performance Management was applied due to an unexpected shutdown. I had no idea that my screen was to blame. In fact, that never crossed my mind due to my understanding in iFixit's "amazing reputation." That changed 2 months later (outside of the warranty period) when I took the iPhone to the Apple Store and when they ran diagnostics, the results said that the screen was causing my Performance Management AND my home button being non-functional! I put the old screen back on, and now performance management is off, but my home button still doesn't work! I am planning on going back to the Apple Store and iFixit needs to do something about this. I believe that they should pay Apple to fix my phone. Whether that requires repairs or buying me a whole new phone, I don't care. This is unacceptable from such a highly praised company.

Do NOT, and I mean do NOT by an iFixit branded screen!

Hello Gregory, I am sorry to hear about your repair trouble. It definitely seems like the Ifixit screen you purchased was a defective part. I have limited experience with ifixit's screens, having only worked with maybe about 10 pieces. Ifixit's lcd's are aftermarket, but I think above average quality.

Unfortunately I have to disagree be that the faulty lcd damaged your home button. While I have seen dozens iPhone 6s/7/8 series with bad home button connections, I have never seen a defective screen cause electrical damage. In my experience, reinstalling the home flex PCB on a known-good screen will always bring back home+fingerprint function unless the technician damaged the PCB during the repair.

Yes Ifixit should refund or replace your defective LCD.

No, they should not pay Apple $129 to perform a repair job. Ifixit and ifixit's part did not break the home button.

I’m sorry to hear that the repair did not go as planed. I’m not sure if the screen you purchased from iFixit was a bad part or not but I can see Apple telling you this so they can get you to pay $129 for a new screen. I work for a company that does device repair and it’s not uncommon for us to get bad parts from time to time. Never seen this issue before however. It’s unfortunate that problems did not start presenting themselves before the warranty period. You have to be really careful of ribbon cables and screw placement as this will cause all sorts of problems and even break the phone. As for the home button. As long as it’s not damaged, changing the screen should restore functionality to it. If it is broken, you’re in for one bad time as each home button is unique to the phone and you can’t just put a new one on and have it work. Only Apple is able to link a new home button to a phone.

When I was training, I did not get the placement of the connector for the home button correct and this ended up causing Touch ID not to work. The button still registered. As I said before, you have to be really careful with the cables. Even a little to much pressure on them and it will cause a problem or break something. Fortunately for me swapping out the screen made Touch ID work again. I believe on your model you can replace just the home button extender cable as I believe it’s just adhesives to the back of the shield on the screen.