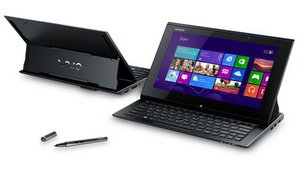 An 11.6" touchscreen tablet and a Full HD laptop by Sony.

I am looking into upgrading the SSD drive of my Sony Vaio Duo 11 convertible laptop. Having a 128GB in it right now is a little tight...

Has anybody removed the access panel under the Duo 11? Before starting it is always nice to have somebody who has done it share, so I don't remove screws for nothing or forget to remove others and break something!

Also is there anything special as far as installing the new drive in and installing Windows 8 on it? It'll be my first install of an SSD drive, though I have a lot of experience with IDE and SATA mechanical drives.

Thanks for any input

Please let me know how you do with this project. I imagine a ssd install would not be too complicated.

Please let me know, I also looking how to remove Cover Panel for Sony Vaio DUO 11

Found some pictures in:

Great article you referenced, Zero. I have the exact same question and will be attempting the upgrade soon.

Based on the images, I suppose it will not be easy to open. The SSD is visible from the top view. So I suppose that to access the ssd we'll have to disassemble entire unit. Notice that the Toshiba SSD does not have cover but two screw "slots".

Found another blog ... Take a look

But is lacking the center screw in the auxiliary battery slot and the one near RJ45 slot in the back.

The cover's speakers are very delicate and are bonded with adhesive. Must be careful not to damage them.

It should be noted also that the SSD is a mSATA one.

I'll wait for the release of a bigger SSD to make the replacement.

I hope this will help you.

The pictures are enough. The text report the process and that removing the screws can "damage" the unit.

I've done this. but waiting for a larger SSD.

I successfully accomplished dismantling my Vaio DUO 11. It was in a mad rush after my wife spilled coffee on the keyboard. Despite her folly, she did the right thing and immediately flipped the computer upside down to prevent the coffee from spreading to the internals any further.

A few things you need to know.

1. Remove all exterior covers INCLUDING THE SPEAKER MESH!

The speaker mesh is two layers, and one layer will be ruined upon removal, but the top layer will be salvageable, use a knife to pry it off. There are 3 rubber bumpers that are attached by adhesive; rip them off. 2 flat plastic covers. The other covers are replaceable, but basically everything that can come off, must come off (except the folding feet, just flip those up to access the screws beneath.

2. Keep track of your screws

I was in haste so didn't label anything, which is not exactly necessary except for a few odd silver colored ones. MAINLY KEEP THE EXTERIOR SCREWS SEPARATE FROM THE INTERIOR SCREWS. I made the mistake of not doing this, and so after reassembly, my count of screws was correct and I didn't miss any, but I was left with short screws outside where I needed longer ones. So as long as you keep your exterior screws separated, then you'll figure the rest out.

4. Use the quick releases

I tried to avoid removing board connecting ribbons, but it would have gone a lot smoother if I had used them and left a few things in place

The motherboard in particular has some sticky pads beneath it, so after the screws are removed it will require a bit of force to remove; don't be scurred'.

As far as the SSD, you do not really need to remove the motherboard to get to it. There are a few ribbons and stuff in the way, and it has it's own screws along with a sticky pad beneath it. Once the screws are free just lift it off the sticky pad and pull it out. There are no latches or anything. It is a lot easier to remove than the keyboard, since the keyboard was beneath everything.

I'm not 100% sure as I'm not a computer guy, but you may want to disconnect the battery before removing the SSD. It just connects to the motherboard with a recessed pin connector, so you can just remove a few screws so you can pry it a little, just enough so the battery disconnects.

Basically just try it, if you put it back together and there are some extra screws it is not the end of the world. I'm an HVAC mechanic and we are accustomed to just taking crap apart and putting it back together. JUST DO IT. Step #2 is really all you need to know.

If you are curious about the coffee incident, then here is more about it. There is only one way to clean a keyboard of sticky liquid, and that is more liquid. Yes, I rinsed my keyboard with hot water after it was removed. I dried off most of the water with a blow dryer and then set it in a bag of rice for 24 hours. I figured it was already ruined from coffee so a water rinse was worth it; I had nothing to lose. Now my keyboard is working like a champ; it needed the cleaning anyhow.

Unfortunately I did not take any pictures of the process, but you can email me with any questions.

Thanks, the part about the prying really helped me. I was trying to remove the motherboard and I already removed all the screws I could find, but could not figure out for the life of me why it wouldn't come off. Then I saw your comment and simply applied some more force. It's kind of amazing how long I deliberated over this when all I had to do was trust myself.

Also, about the keeping track of which screws come from where, I like to fold a piece of paper with alternating mountain and valley folds, then place the screws I take out in different rows so I remember. No need to label every single screw.

I used an m-sata to sata enclosure in a usb sata disk enclosure and made a copy of my original disk using Clonezilla. YUMI will help you download and put this on a bootable USB flash disc.

1. The only problematic part of the case disassembly is the loudspeaker grilles. You almost certainly will be unable to reattach them and the cloth underneath using the adhesive tape that fixes them, make sure you have something suitable to re-attach, your best bet might be to detach the grille whilst leaving the fabric in place, then cut a hole in the cloth to access the screw.

2. When you open the case, don't forget the cable that goes to the switches under the front panel, it's very fragile.

3. Disconnect the battery as one of the screws and mounting brackets is shared with the ssd.

4. The cable that obstructs the SSD is quite difficult to remove, I used a steel rod underneath and pressed from the top with my fingers to clamp and get a grip on the cable whilst gently pulling away from the connector, there are no latches, it's just a push fit.

5. The new SSD is a little difficult to insert in the connector because you need to plug it in without really being able to see whether the connectors are lined up.

It will probably will take you 1 to 2 hours, but it's relatively straight-forward despite the difficulties.