How to disconnect thunderbolt cable from display? 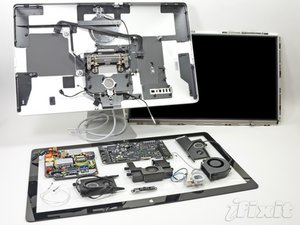 Basically we can conclude that it is not user removable from the outside.

It looks like apple made it relatively easy to replace because there is a Thunderbolt socket inside the device. So one Can replace the cable if they open the display up with either the correct cable designed for the display or if you need a longer cable you can also swap out to a standard Thunderbolt cable, but you loose the MagSafe cable to power your laptop. 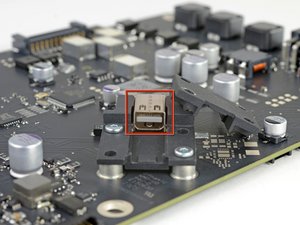 I hope this helps!

This guide helped me out a lot!

Not just the display which comes back to life, if you clean up the dust off the 3 speakers inside and also blow clean the fan, you would experience an enhanced sound output. For me my display audio levels doubled after I dusted off 8 years of accumulated dust. Also the front glass had developed a layer of soot which I had got accustomed to; that is gone too :) Its like a refresh of entire display hardware.

Is it possible to just buy a thunderbolt to thunderbolt cable to connect my laptop to the screen since my embedded cord is split and not working?

Yes, you can by a thunderbolt-thunderbolt cable and plug it into the thunderbolt port on the back of the display. I did this and it works fine.

I tried this to no avail. I plugged a mini displayport cable (which said it supported thunderbolt 2) into the back but the display didn't recognise the laptop or do anything.

Is this because the cable is somehow incompatible?

@Sam Willis - What is your system?

This post truly saved my company money that would have been spent on buying an entirely new display monitor. I looked on several sites for the replacement display cable before I finally found an inexpensive one, $18.99, on Amazon. The cable came in great condition. My only nervousness about doing this repair was removing the screen with fear of not being able to reattach it the same. I assumed that the glass screen display was held by tape. To my surprise, the screen attaches with magnets. AWESOME!! It took me over an hour, nearly two hour actually, to break down the monitor in order to get to the cable. It took me about 20 to 30 minutes to put all the components back into place in order to test the new cables. To my frustration, it did not work. So, I just walked away from the device and went home. I returned in the morning and took the monitor apart again to find that I'd forgotten to connected ONE cable. LOL After putting the device back together and connected it to my Macbook, the display immediately worked. Thanks again for the guide!

Thanks. this saved the day for me. I did have to shave off some plastic from the new thunderbolt cable, and completely remove the mag safe cable, so that i could use the same hole in the back of the monitor. Now my monitor has a 6 foot cable, and i won't be having trouble plugging it into my computer anymore!

@adriandatriguiran Did you replaced your cable with a normal thunderbolt cable?

Yes. But I had to shave the plastic off one end of it or it would not fit in the space reserved for it. This becomes obvious once you remove the old cable.

My 27inch died today. Could someone graciously post a link the the replacement cable available in Canada

Are you sure you need this cable? A dead display is likely something else. You can prove if the cable is bad by plugging in a Thunderbolt cable into one of the ports on the back of the system and the other you're Mac. If this works then your All-in-One is bad. Otherwise you have a deeper problem.

Any chance I could attach my Thunderbolt display to my new Macbook 16" 2019 using a Thunderbolt 2 to Thunderbolt 3 (USB-C) cable (if such a cable exists) , rather than using the Apple adapter (https://www.amazon.co.uk/Apple-Thunderbo...)?

Sorry no, the signaling is different!