2 New LCD's will not turn on after LCD replacement?

I am replacing an LCD on an iPad air but once the new LCD is hooked up the device will not power on. To check to see if maybe the port on the motherboard got burnt out, I hooked up the cracked LCD and was able to power it on and off. I then figured that the new LCD itself was bad. SO I returned that one and ordered a new one and the same issue persists. I tried holding the home button and power button as well. Any ideas?

This issue is because of a firmware issue. The point of manufacture did not flash the appropriate firmware to the LCD. You need to replace the LCD with a new one - but maybe from a different vendor so that the chances of the problem repeating itself is reduced.

Thanks. That's the same conclusion I've come to. I'm going to try a take off from eBay hoping that this feedback will help my vendor straighten this issue out.

So these lcds are useless or will they work in some iPad airs and not others?

I'm RMAing 2 of them just incase. The vendor says that this isn't a common problem. I'm thinking this maybe an issue on newer models that have been coded like you suggested.

It's really annoying, I have just had another LCD from a different vendor with the same outcome. Is there any way to distinguish which ones will work and which ones won't.

eTech parts is aware of the problem and sending existing inventory out to have them flashed with correct firmware. In the mean time I bought a used LCD off of eBay and it worked.

I have replaced the digitizers on ipad Air before with no problem but this time we had one with cracked LCD screen. Replaced the screen, but it stayed black. With the old cracked screen light was coming on and could see the image. As our distributor was only 20 miles away so I took the device to their office and tested with 4 more LCD screens. They all stayed black. They were also from the same manufacturer with same numbers at the back.

Decided to order from a different supplier. It worked. So obviously the problem was with this distributors screens. I contacted 5 different suppliers on ebay and aliexpress regarding this issue. They all said that they never had any problems with their screens. I bought from another supplier (Kamani, Slough, UK) on ebay who has sold about 73 so far ( £ 60 / unit ). Some people claim that these lcd screens are coded by Apple but it is not true. There are some screens in the market which just don't work at all.

During all this process I had one more problem which just appeared from nowhere. Although this was not originally the problem. When replaced the screen, ipad would not charge. However, it was charging fine before. It was making beeping sound after about 8 seconds and would also not switch on. Took the board out as it is just glued to the case. Checked all the connections and they all looked fine. Just left it for about 24 hours. Then pressed the power button and it switched on. Maybe it was holding some kind of charge which got released. It was fine after that.

Had some very painful few days but wanted to share my problems here so that it might help someone.

Is there anyway we can flash the lcds ourselves, I have a bunch of these units with this problem and would rather do it myself.

It will cost me more delivery to send them back to china.

There have been known compatibility issues with some of the LCD's in the market but I can assure you that our assemblies will not cause you these problems. Please let us know if you have any further questions or concerns. Thank you!

Forgot to add this link from ebay where I bought from.

Aliexpress can also be a very useful link too to buy cheap. This guy has sold about 16 with 100% feedback so obviously no problems.

In my experience i felt i had the exact same issues but looking back i remember when working on an iphone that apple does not tighten screws down very tight at all.Try loosening the three small phillips screws that fasten the lcd and digitizer cables down and see if that doesnt resolve the issue of the lcd not responding after replacement.

The screws don't matter. The issue is there even with the screws completely removed.

Has anyone found a solution to this? I too have replaced an ipad air LCD only to find out that it doesn't work not unless I put the old one back in. This is very frustrating. Have you found a seller that has LCD's that work other than trying to find a good used one?

I have replaced the digitizer, but not the LCD, yet, and at first I was getting horizontal lines, even then you could tell that the digitizer was responding. While trying to trouble shoot this issue, it seemed like it just stopped powering on. Once I removed the screw holding the battery connection in place and prying the connection slightly apart, and replacing the screw, it did power back on, but I still have the horizontal lines instead of images. Does this mean I have a bad LCD now. Unfortunately, it was fine before I replaced the digitizer. All connections look good, so any idea what I could have done to cause this would be helpful. Thank you. 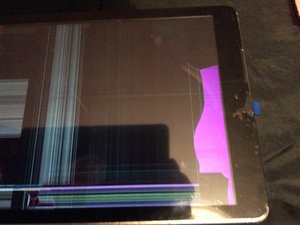 The LCD is cracked and has to be replaced.

certainly you have cracked the lcd screen

Has anyone found a solution yet? my ipad air works with the old crack lcd and I switch with the new one until shuts down or runs out of battery is so annoying!

Am Aus, I have a similar problem. My ipad was working with a broken lcd but after replacing with a new LCD, the phone goes on and off. Can someone help me on this problem