How can extend airport antennas

I am trying to install a wifi ac AirPort Extreme card and the card is a little bit longer than the N card. How can I reroute the antennas to make them about half an inch longer to snap into the ac card? Any help would be appreciated.

Like Jordan, I was able to re route the cables to successfully install the newer wifi AC card in my late 2010 13" Macbook Air. Snipping the antenna cable from the hinge part was the scariest thing, but after that I had _just_ barely enough cable to plug into the card. The card is of course too long to screw in.

Have yet to test with a wireless AC router to see the performance boost I get.

You do realize the the current ac part does not offer any real performance improvements. Given the risks of damaging the antenna cable or pulling the connector off by stretching it is not worth it. - Sorry ;-{

To Dan; Sorry but you're wrong. The newer cards offer a few new improvements. 1. Longer range than the older N cards, 2. Lower energy consumption than the older N cards, 4. The ac card allows you to use all of handoff and continuity features in OSX Yosemite. 5. Direct local access to another computers using an ac card utilizes ac speeds(such as Airdrop). So as long as you're careful and don't act like the Hulk rerouting the cables there is minimum risk to doing this upgrade.

To Peter; Im glad your happy with this little upgrade. I have found it worth it too.

1 - Longer range: Our testing did not see any improvement within an office environment. 2 - True, the newer design does use a bit less power but not enough to lengthening your run time by much (a few minutes at best). 3 - missing your point on that one. 4 - Sadly Yosemite beta's so far don't allow altered systems to use Hand Off. 5 - Define AC speeds here so were talking about the same thing. A dual antenna system (matched) offers MIMO, sadly the airs only have a single antenna so their throughput will not be much more than a 802.11n device. Don't take my word do a real throughput test comparing both boards, others have and they posted disappointing results.

Peter - I don't want to be a downer here. The rub is the 1st generation of 802.11ac was more PR than real improvement (mostly they cleaned up the spec). Just so you have some facts, here's a copy of the IEEE standard for you to review: 802.11ac-2013 Jump to section 20 - HT PHY spec and then VHT PHY spec which follows it. Then jump to 22.3.11 SU-MIMO & DL-MU-MIMO Beam forming. Then look at the TX masks under 22.3.16 on down. 802.11n uses a 20MHz mask and 802.11ac offers a 40MHz if the AP Ack's the PHY as compatible (ac to ac). So lets look at the real rate difference n is about 35 Mbits per sec Vs 50 Mbits for ac in other words 15Mbits faster now lets convert this to Mbytes so its in a more common measure and the speed improvement is:1.875 MegaBytes or just short of 2MB. Sadly not much ;-{ MIMO Beam forming will improve throughput times two, four & eight. But the hardware is not there yet, don't worry its coming! Then I'll make the jump.

-Longer range; The same computer with the N card gets most of my house, bars diminish in the basement, deck area and garage. With the ac card I get full bars in all places.

-Handoff/Continuity; It actually does work when you swap for a BCM94360CS2 card that found in newer apple products. As long as apple uses it when Yosemite does its checks it passes and works fine. This also checks out with older MacPros using an adapter and an ac card from a new iMac. Ive used it on both a MacPro 3,1 and obviously I got it functioning on my Air. You are correct in the fact that you can not use 3rd party dongles or unsupported cards to make it work.

In the end I think this was a worthwhile upgrade to a 2011 MBA for the $30 the card costs.

Sadly, you can't extend the the connection without replacing the entire cable which would be prohibitive. You will need to replace the antenna unit within the display lid.

We have had a lot of dialog on the pro's n con's of swapping out the older n board with Apples newer ac board (first generation). We did some tests and the amount of gain in performance was not much. Others also reported the same results.

The next generation of ac hardware is just coming out. I would wait to see what these look like. Or, look at an external unit which will give you the needed matched antennas.

FYI - Arstechnica -Multi-user beamforming is here—in $270, 1.7Gbps Asus Wi-Fi router. Review the embedded links in the article which explains the limits of the 1st gen. equipment.

I ended up re routing the cables. I had to cut the tape holding it in place under the logic board and then I had to snip the center part of the hinge thats soldered to the wire. After thats done it gives you just the extra inch you need and it holds the wires right along the same spot they were. It ended up working perfectly and I have had no issues.

It would be appreciated if you update it:)

Harry - The main issue here was getting the 802.11ac services for faster throughput, not the Bluetooth 4 LE services. No one has really tested HandOff within Yosemite as you will need to alter the OS to recognize the altered hardware as compatible with the MacBook Air systems. People have reported using the newer Airport card (802.11n) that offers Bluetooth 4.0 LE in the older MacBook Pro systems with HandOff. So it might work.

Handoff works great but you do have to mess with the os to make it work on these machines. I actually did a tutorial on how to do it but it's kind of involved so depending on your skill level you can decide to do it or not

Harry - I can confirm that it works, but only after the kexts are hacked, and you switch to developer mode to allow them to load as described in the tutorial linked by Jordan. (It's wonderful, BTW)

Thanks for your comment! After reading this thread again, I had some questions. Once it's cleared, I will try it :) Do you know any reliable site for buying replacement airport card? IF not I will try eBay or aliexpress :)

Hi! Thanks everybody! I have another question. As you know, the antenna cable is slightly short. As Dan did, can I just extend it by cutting the tape which is holding the cable underneath logic board..?

1. Should I cut the cable and reconnect the cable?

2. Is there any problem from the size of both airport card? Because the 2013 mid model seems longer than 2010 model. If you help me again, I could do it by myself. Then I will update its result! haha. Thanks all!

Don't cut the cable its self, just the bindings to gain the needed length. Yes, the newer board is slightly longer so you can't screw it down.

When I did the replacement I took some pictures for another thread here http://forums.macrumors.com/showpost.php...

The new card is longer but it stays put, no real need for tape or anything. You do need to take the screen hinge off and cut the little bit thats soldered to the hinge, you can see what it looked like after in the 3rd picture there. After that the hinge goes back in place with no issue and it allows you to get the extra inch you need for the connection.

Hi! Crystal CLEAR!! :) Thank you so much. I just ordered the airport card from aliexpress. Once it's done, I will update here!.

It's time to upgrade my SSD as well :) Thanks Jordan, Thanks all!

I simulated(?) this situation. I think I'd better use electrical tape to fix it :) 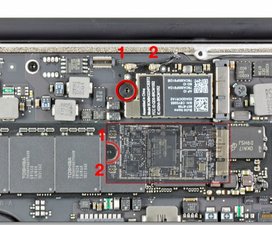 oh, i hope i saw your message earlier so that I did not need to research about it for several hours. i bought the exact item you mention after my hours of research and waiting for it to come

I went ahead and dove into the unknowns of this matter regarding the ability to tear down the antenna cables to manipulate and extend the Air Card antennas and I found out some rather exciting information.

Background: I first tried to do what another poster here said what had worked for them, but ran into problems. While trying to pull some antenna wiring cable through the hinge in order to reroute the hinge so I could make a 11” 2010 MacBook Air display work on a 2011 of the same model A1370, I perforated the outer coating of one of the antenna wires rendering it more than likely useless. The 2011 model has antenna cables built into the display that are about 1” longer than the 2010 model. So…. you can use a 2011 display assembly on a 2010 without modifying the antenna cables, but not the other way around

At that point due to the wiring damage I was all in to just try to extend the wires using some antenna wiring from a 13” A1369 display which I had that was cracked .

Method: I just did a simple cut and spice by Very Carefully removing the wiring coating around the cable which holds 2 wires inside it. The innermost wire is straight and covered, and is surrounded by the outer wire that’s “braided”.

Once the “straight/inner” were joined with reciprocal wire from the longer A1369 parts wire, i soldered the wires together and repeated this step with the “braided/outer” wires.

The wires were sealed with shrinking tubing 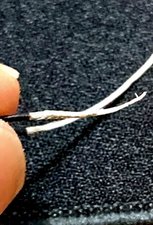 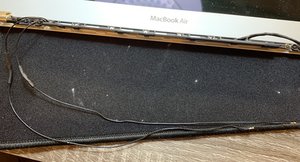 Plugged everything back in and it worked perfectly! 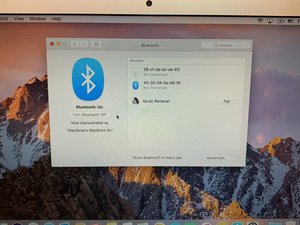 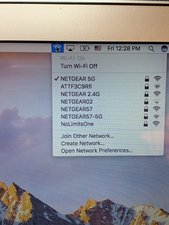