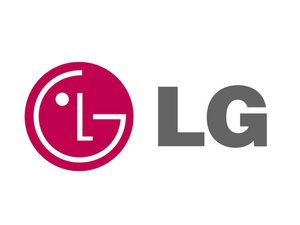 Repair guides and support for your LG TV.

What value are these LCD TV LG M2762D-PC capacitors?

I have this LG TV M2762D-PC, this is a combination of TV and computerscreen. Bought it in april 2010. Use it as a TV and worked great till yesterday. 10 seconds after powering up, the display went black, sound was still ok. The remote control still worked for on/off and volume, but could not change channel anymore.

I managed to open the TV and take out power supply. 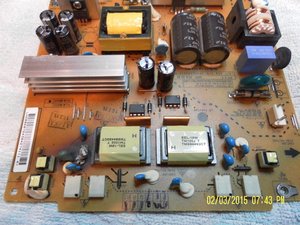 No bad caps but one burned BLUE ceramic 'C'. There is nothing marked on this 'C', so I don't know what value this is. It looks the same as the other blue 'C's on the pcb.

1/ anyone can tell me what value this ceramic 'C' is?

2/ I guess this is not a multilayer pcb. As you can see the damage on the pcb, is it still ok to repair this pcb by replacing the 'C' or should I look for a replacement pcb?

I already have done some repair on monitors (bad caps) and mobile phones (replace digitizer and lcd), so I can handle a solder gun. :-) 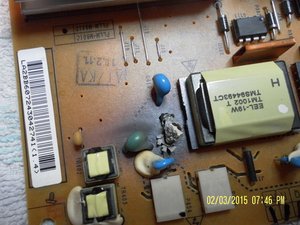 Thanks for reading and even more thanks for any answer that can help.

Today I managed to take a macro photo and see some identification on the other ceramic capacitors. 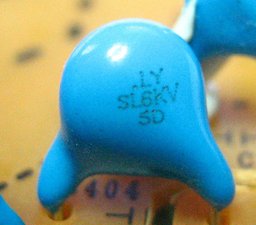 I think this is high voltage capacitor (6KV)

Anyone can help? Where to buy these?

Almost one and a half year later, after replacing the burned capacitor and replacing the other one that changed color as well, the unit is still working, but there was this burning smell... 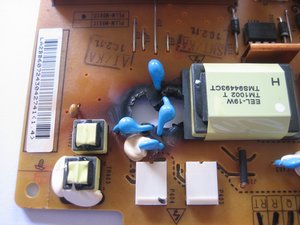 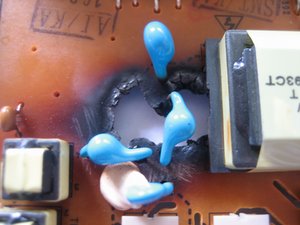 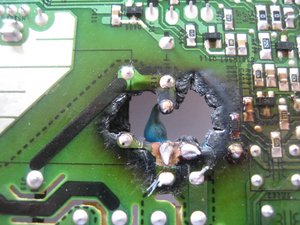 Is it the chemical residue from the old burned capacitor that caused these damage?

Time to look for another pcb I guess...

Thanks a lot Oldturkey03,

Your answer was very accurate and helpfull.

Googling 3PAGC20002A-R or PLLM-M901D learned me this is a common problem with this pcb. I will search in a local shop (electronic components) first.

Yes, very common problem with the circuitry in that model. Glad I could help.

Yesterday, I received the ceramic capacitors 5pF 6KV and installed them. This TV works great again. Thanks for helping me out.

Where did you purchase the capacitors?

I have found these capacitors in a local shop (electronic components).

There is also the answer from oldturkey03: Mouser.com

I translated your answer:

Hi Pierre, I feel not to answer in English, I explain what I would start doing first unsolder this capacitor burned, the black plate wipe as much as possible, and thus try to see the numbering where was this blown capacitor (C4xx), if you can't see the numbering I I would set just to the opposite side of the plate where there are 4 blue capacitors and see which number (C4xx) is that is not repeated by comparing both sides, and that will not be repeated because trying to weld and test, I potara by C402, greetings, I hope to help in something is my first post on ifixit.

I did remove the bad capacitor. It says c418 underneath.

This does not tell me the value of this capacitor.

As you can see I took a macro photo of a good (same) capacitor.