Just got the MACMINI/2.6GHZ/8GB/1TB - USA and was a bit surprised by the differences between the 2012 model which seemed to be very user-upgradable. I've ordered the new screwdrivers needed to open the unit, I just want to make sure that I'll be able to replace the 2.5" 1TB platter drive with a 2.5" SSD. Yes/No? Any feedback would be great (first time posting a question on here).

Off topic: The reason I bought the Mac Mini was because I got a 4k display and my Macbook Air wasn't able to drive the display. The Mini seems to be working but the UI elements (like the top bar, finder windows, etc) are all very very very tiny (screenshot here). Is there a way to scale those up?

I thought I would post an update. I ended up popping open my Mini and swapped out the 1TB platter drive with a 2.5" 240GB SSD that I had. I ran some tests using the app 'blackmagic Disk Speed Test'. It was pitiful, it was not much of an improvement over the 1TB. So I put the original drive back in and closed it up and took it back to the Apple store, and they were pretty awesome, no restocking fee or anything. They put the refund onto a gift card (the only option for getting the refund immediately) and I ordered a new 256GB PCIe Blade SSD version in the store and had it shipped to my home. Turns out that no stores carry any equipment that isn't the 'standard' generic version, apparently it's cheaper to have it built on-the-fly and shipped from China.

Anyway, I ran the blackmagic speed test on the new one and it was incredible, about 400 - 500 MB/s faster than the other SSD I installed. So, in the end, Dan's advice of returning it was spot on, thanks Dan! I wish they kept other versions of products in stock at the Apple Stores but the refund experience was great. 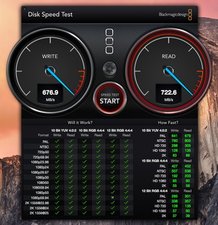 Are you sure you want to do this? If you just bought it I would return it and get the SSD model that way you could add in a bigger HD so you have a fast system (SSD) and have deep storage (HD).

Hi Dan - thanks for responding. I bought the device from a Apple Store, and it's been opened, do you know if they will exchange it without a restocking fee? I just googled it and couldn't find a straight answer. Thanks!

If you are exchanging I think your OK, Just pack it up so it like like you haven't opened and give it a try. Good Luck!

To add in the SATA drive as your second drive (after swapping it). All you need is the Mac Mini dual drive kit (cable & special tool). The drive needs to be a 9.5mm or smaller height drive. We've been putting in 1TB HD drives as our base system, at home I put in a 2TB drive.

Thanks again, Dan! I wish that they would keep the SSD model available at the store, it says it would take a week to ship the 256GB SSD model to the store.

Already having another issue, turned it on today and it says there is no wifi hardware installed. Luckily the ethernet connection works. Googled it, seems to be a common issue, haven't found a working solution yet.

There is a fix for this! but its something you should let Apple do if you plan to keep the system (under warranty). As for waiting a week Ouch! I would still do the swap out in the long haul you'll be happier! I bet more people are thinking the same way which is why the system in that config is on short supply.