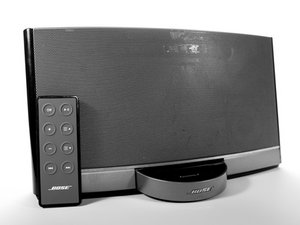 Released in 2008, has 30 pin connector (can be used with iPhone 4S and below) which will not work with newer models. The main differences between this model and the first edition is the remotes layout and color. Product features include: rechargeable lithium-ion battery, rotating docking system, remote, portable, built in carrying handle, and Bose quality speaker.

My aux input of my bose sounddock is broken. Does anyone know how to fix this? Or is it even possible to fix it?

Hi, Did you find out how to repair it? I have same problem... cheers.

This answer is a little bit late, but I just actually fixed this issue (though mine was the power connection, they’re really on the same component). Once the bottom plate is removed (follow directions for replacing the docking board, but don’t actually replace the docking board), you’ll see a small PCB on which the AUX input and barrel connector for power are (there’s a small plug on the opposite side where it connects to the speaker; be careful when unplugging this). Check the solder points for the audio connector, and/or check for any bad capacitors.

One of the solder points on my power connector had broken so I just melted and soldered it back. Sometimes it’s easiest just to replace that entire little board, though, if you can’t see anything wrong with it.

Don you know where i can find replacement for the PCB with AUX and power input?