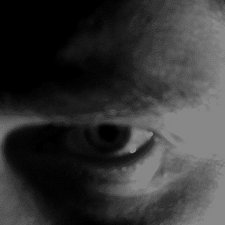 Why is the SSD behave so poorly in the upper bay

I wanted to replace my stock 1TB hdd (Mac Mini 2012, i7) to dual drive: HDD + SSD. When both mounted in the mini OSX wanted to format them into a fusion drive, which was not what I wanted. Therefore I unplugged the HDD and only left the SSD in an upper bay (farther from the bottom opening).

I had several problems formatting it. Installing the system took around 9 hours, after each reboot it took several mins to get rid of the "prohibition sign". Finally decided to install the yosemite using mini in target mode, then installation was a breeze.

But after booting up the Mini with this installed system i took about 15 minutes to boot. I could move mouse, drag windows but each action, each click that involved disk operations caused a minute of the "beach ball".

I decided to put the same drive, with the same system installed, onto the lower bay - the one closer to the mac mini bottom case. It launched like a rocket, system starts within 10 seconds, and is really fast.

Why is this SSD so slow in the upper bay and behaves fine in the lower one? Is it possible, that the sata cable is damaged in some way? I dod not use it before. The disk, however, behaved rather normally when I used it with target mode.

Can I try to install the HDD now in the upper bay with that cable and expect it to work fine? I am little afraid mounting and dismounting the mini back and forth. Or better leave it like this, while everything is working fine?

Thank you all for the replies;

DAN: really I would like to have both the SSD and the HDD connected internally in the MINI, provided that that does not slow down the machine. I mainly use Logic Pro for music creation, second drive could serve as backup and data bank then. Now I just have the HDD connected via USB 3, which is also fine. The screenshots:

the SSD, in the lower bay:

the HDD in an external enclosure connected via USB 3: 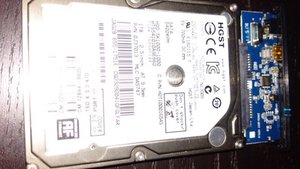 He said everything was working fine in his last sentence.

I think he's still trying to get the second drive back in. He maybe hitting the Hub controller port speed issue but it could also be a bad cable.

You could be facing two issues here:

The easiest fix to start with is replacing the SATA cable as it could be bad or was not rated for SATA III (6.0 Gb/s) drives.

The second issue here is the Platform Controller Hub chip which is where the systems SATA ports logic is located can have an issue handling SATA III drives (like this HD or your SSD) in the upper location (were the optical drive would have been).

It appears the speed multiplier logic is not clean on the higher clocked i5 & i7 CPU's used in this series. So the second SATA port can't support a SATA III drive. We've see this in the MacBook Pro's which use the same Intel 7 Series Chipset (Platform Controller Hub logic). So a SATA III drive just won't work reliably. You's see constant retries (slow reads & writes) to the drive like you have noted.

Part of the problem here is the SATA port signaling can be confusing to SSD's or HD's that have auto sense so they won't work correctly either! You need a fixed SATA II drive so this is were we are stuck!

Finding a fixed SSD is almost imposable these days. So thats out. You can still find fixed HD's with fixed SATA II (3.0 Gb/s) speed. Which is what I would put in at this point.

More news, and a possible solution...

Apple Hardware Test showed some SATA error, which I supposed could be cable related. Teetotal reported no errors. I got a new SSD, Samsung 850EVO, instead of Crucial mx100 that caused problems. Replaced, and ... no problems found in AHT.

I did not enable TRIM in OS X 10.10, wondering if this could have caused the issue, I don't think so, because the performance with Crucial was so poor even before I enabled TRIM. Please advice, if you have any suggestions, I know the Samsung have some garbage collection on their own...

anyway: looks like the performance problem and AHT SATA problem could have been caused by the Crucial SSD, with Samsung it looks fine, so far, and the performance is great, no AHT errors (TRIM not enabled).

Sounds like you found the problem bad SSD. TRIM is a housecleaning function within the OS which would not have any effect on diagnostics or other testing. Yes, you should enable it to gain some performance.

no drawbacks, kernel panics?.. sure?

Drawbacks nope! We have all of our SSD's setup with it as it improves performance (over 150 systems in using 3rd party SSD's - iMac's, Mac Mini's mostly). Haven't seen any kernel panics caused by using TRIM. Don't see how it would.