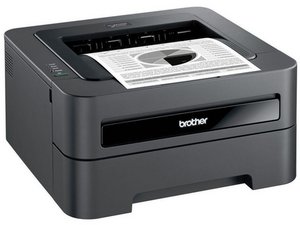 You can remove plug wait for a minute then plug it in hold on button and plug back in. It will then stay on for a short time then turn off.

1. Unplug the power cord from the printer.

3. Press and hold the Power button.

4. While still holding the Power button plug in the power cord

5. Wait for it to start, when normal home screen displayed release the power button.

6. There should be a message to replace the tray.

Hopefully it will be good to go.

Update Try it 2 or 3 times before you give up. According to the comments below, for some it did work but only on the second or third attempt.

Update #2 According to some comments below the above procedure was also successful when used on other Brother printers, laser as well as inkjet models.

Also if it does succeed here is a link which allows you to download the "Firmware Update Tool" which checks to see if there are any firmware updates for your printer. Brother doesn't say if there are or not but it never hurts to check in case they have a 'fix' available. Scroll down to Firmware.

Perfect, this was driving me crazy! Thanks.

Thank you very much.

Thank you. My printer is up and running now .

Yes, its working...thank you

I Too had the same issue and i tried many things but nothing helped me like i was trying .

Than I Realised That I was trying all Steps Wrong . Please Turn Of Your Printer And Unplug it from Power

See If All This Helps You To Fix Your Issue .

I had this problem and the paper tray solution did not work. With having to get work done immediately I was in a bind. I then opened the ink cartridge cover, popped out, and replaced a cartridge. I then held the on button, plugged it in, and it was working. Very relieved.

this did the trick for me popping out the cartridge as you instructed, seems so silly.

This is the only thing that worked for me, too. Brother HL-L2380DW.

I started having this same problem after updating firmware. My Printer doesn't have a push bottom on-off switch, its a toggle type. I don't see holding a toggle down when it is already down as far as it can go doing anything at all as it is already down and in either the on or off position

Doesn't turn on after standby.

This seems to be a common problem on many printers of this series, but the solutions presented here are just a workaround. You have to go and unplug your printer each time you want to use it. Quite silly for a WiFi printer...

I've dug a bit deeper; the problem lies in a supercapacitor 5,5V 0,22F on the main pcb motherboard. It's unable to keep a charge and therefore the printer fails to come out of standby.

You can get to the pcb by removing 9 screws, unplugging a few connectors and a bit of fiddling. Go in from the top, remove the scannerbed and work your way down. The supercap itself is a throughhole part that's easily replaceable with a standard soldering iron and costs around €2.

Good luck fixing this chinese piece of $@$* and getting your money's worth out of it!!﻿

Wow that's a little heavy for me.

I also had the problem where my hl l2380dw would not power on occasionally (same socket).

Sometimes switching socket would work, sometimes not. Maybe it was more about unplugging it for a longer time?

In any case, ran into this issue again, saw this post, pulled out the tray (not sure if this is important or not) unplugged for about 30 seconds (a little longer than I had tried previously), and then while pressing the power button re-plugged it in... it powered on immediately.

My Kyocera FS-3820N will not power up, anyone has a fix for this problem? I plugged it up once and it came on, this I unplugged it without powering down. Now it will not come on at all.

I used the prior method and last time it did not turn on, until I left it unplugged for over 1 minute before trying it again, and it worked. Very important that the internal electronics are completely off.

We also have the problem where the printer occasionally won't turn on. Jayeff's solution worked once, and sometimes just unplugging and plugging in again works. However, today the printer would not turn on, so we plugged it into our APC Line-R 600 voltage regulator and the printer started fine. We found out two years ago that the voltage coming into our house was on the high side of normal most of the time, and our computer would exhibit functional problems. APC Line-R 600 is less than $50 at Walmart, Office Depot, and Amazon. The electric company, here anyway, will check your line voltage for free.

You can also try another method to overcome your problem. The following method is taken from Brother MFC-J4510DW Manualand i hope this will help you more effectively.

Keep holding power button while plugging power cord back in and for another 60 seconds after, then release it. Make sure that there should not any damage or crack in printer wire. The proper voltage rate must be passed. The lithium battery inside printer should be recharged. If simple restart will not fix your issue, then move to hard reset.

This issue is now fixed for me.

I started having this issue just after changing both the drum and the toner cartridge and updating the latest printer firmware for my HL-2280DW. I did not know which of these changes initiated the problem.

The printer was showing offline on the network. It would remain in deep sleep, with its switch still ON. Switching the printer OFF, wait, then turning it back on, the printer comes back online, visible from the network, and restarted printing.

The final step was to update the firmware of my router. After everything was up-to-date, the macOS bonjour connectivity is back. If I print while the printer is in deep sleep, it takes longer than before, but it eventually wakes up without needing special attention and starts printing again.

did the trick involving power button & plugging back the cord

but it would always resort to shutting down mode

so I had to l eave the lid open to bypass the error so that the printer would work again.