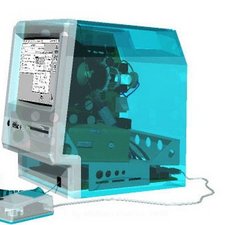 Mac Pro not powering on

Happy end of year everyone!

Unfortunately, I'm still having problems with my old Mac Pro 1,1 (successfully flashed to a years ago 2,1).

So: my Mac Pro died, most probably in consequence of a power surge after I turned off the power bar without noticing that the Mac was still on. It was very late and... anyway: I bought a 'new' used 1,1 and I'm good to work now, but nevertheless, I'd love to repair my old machine. So I purchased a used original, "working" PSU on eBay. Unfortunately, still no reaction whatsoever when I press the power button.

I could start to swap parts between the working and the broken Mac Pro to see what component doesn't work (I'm still not sure the 'new' PSU really is okay, btw., but before I do that, albeit endangering the health of my only working machine, I'll rather ask the experts in this forum what they believe could be the problem. Could it be the Front Panel Board? Is there any way to find out by 'jump starting' the Pro while bypassing the power button? What else could I check out before ripping the working Mac Pro apart to check every part of the old machine in it until I find the one that's causing the malfunction?

Note that I'm trying to start the old Mac pro without Memory Raisers, Front Fan Assembly, HDs/Disk Drives and CPU fans. I suppose that should not be the problem in order to check out if it's powering up, or should it?

@mathead just so that we all get on the same page, I'd try a SMC reset first:

Resetting the Logic Board

The System Management Controller (SMC) is a chip on the logic board that controls all power functions for the computer. If the computer is experiencing any power issue, resetting the SMC may resolve it. The SMC controls several functions, including:

Telling the computer when to turn on, turn off, sleep, wake, idle, and so forth•

It is also recommended that the SMC be reset after a logic board, ambient board, or ambient board cable is replaced as part of a repair.

Force Shut Down (press the power button for 10 seconds)3.

Resetting the SMC can resolve some computer issues such as not starting up, not displaying video, sleep issues, fan noise issues, and so forth. If the computer still exhibits these types of issues after you’ve restarted the computer, try resetting the SMC. There are two ways to reset the SMC on Mac Pro.

You can use the SMC reset switch:

Press the SMC_RST switch, which is located to the right and slightly below the row of 2. diagnostic LEDs. (See the LED diagram in the following “Diagnostic LEDs” section.) To press the switch, use the nylon probe tool (Apple part number 922-5065).

Press the power button to start up the computer.3.

Or, you can reset the SMC by removing AC power:

Plug the power cord back in, making sure the power button is not being pressed at the time. 4.

Press the power button to start up the computer.5.

The Real Time Clock (RTC) is a chip on the logic board that controls the date and time functions of the computer. If the computer is experiencing an issue booting, resetting the RTC may resolve it. Follow these steps to reset the RTC:

Remove the battery for at least 20 seconds. You may need to remove a PCI Express card to 3. have access to the battery.

Mac Pro has a system reset switch on the logic board that may be used to restart the system while it is powered up. This switch can be used to determine if a computer that won’t consistently boot from a cold start has power supply issues. Follow these steps to reset the system:

With the computer powered up, press the SYS_RST switch located in the upper right-hand 1. corner of the logic board. To press the switch, use the nylon probe tool (Apple part number 922-5065).

Also, check the diagnostic LED's and let us know what you see. 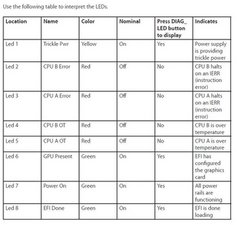 Let us know what, if anything, you get

Hi. Thanks for taking the time to answer. SMC reset is one of the first things I tried, but to no avail, as the Mac isn't getting any sort of power. So: no checking LEDs either. I checked the cable, btw. No problem there either. Just to be clear: the machine is 100% turned off, not just unable to boot or something.