Backlight Not Working...Should I replace Display or Fuse?

My brother has a Mid-2012 Macbook Air 11". He was recently on a flight and was trying to place his bag (which held the Macbook Air) into the cabin compartment. Unfortunately, he lost his grip and the bag feel onto the ground.

A couple of hours later when he went to turn the Macbook and that's where he first noticed the problem with the backlight. He says that when he first turned it on, the screen was very dim, but he was able to make out a dialog box on MacOS. Then he said it flickered and went completely dim.

When he gave it to me, the screen was completely dark. However, by shinning a light through the Apple logo, I was able to see the MacOS desktop and confirm it was the backlight that was not-functioning and not the LCD. I connected his laptop to an external monitor and was able to confirm that everything else was working fine. 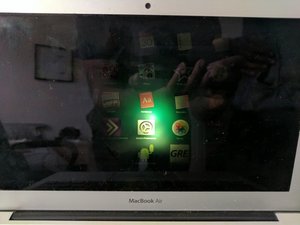 At that point, my initial instinct was to just replace the display. I found a couple of eBay listings of Macbook Air displays that came with the full display housing. However, in the course of my research, I've read a lot of support threads identifying the Fuse on the mainboard of the Mac as the reason why backlights on the MBA might fail.

Here's a picture of the (what I think is the) fuse on the mainboard: 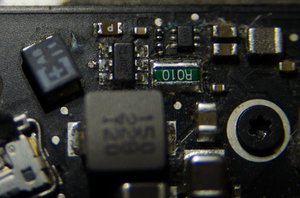 My Question: How do I know which is the right solution? How do I know if the Fuse is blown or not? Will buying the display off eBay solve the problem regardless? Or will I end up wasting money if it turns out to be a problem with the Fuse?

You need to diagnose the issue. The blue stuff at the top of the logic board looks like liquid damage, clean this with 95%+ isopropyl, and check the bottom of the board.

The only reason replacing the display will resolve your issue is if liquid was spilt over the screen (damaging the screen PCB and cable). There is no way a drop could cause the backlight cable to disconnect, it is plugged in snug to the screen PCB.

If you do not know how to diagnose and microsolder this, or don't have the tools, save yourself the time and send it somewhere. There is no point progressing further if you cannot do anything to fix this.

The flashlight test proves the display is working & the cable is connected. Its still possible the connecter is corroded where the backlight power is feed through.

You do appear to have liquid damage! So your issue is within the logic board.

I would lean towards it being a screen issue. Unfortunately, you can't know 100% until you try replacing one of them.

I would recommend replacing the screen for multiple reasons. Firstly, screens are typically broken by being dropped or another form of physical trauma, which is what happened here. In my experience, backlight fuses typically fail due to liquid damage or power issues.

Secondly, replacing the entire lid has less risk. If you pick a good listing for the lid, you have the option to return it and only be out some shipping money, whereas if you replace the backlight fuse needlessly you run the risk of destroying the motherboard.

Let me know if you have any questions!