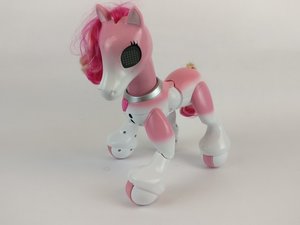 A singing, dancing, pink pony that responds to its included toys and outside stimulus.

How do you get to motor that moves head?

There are 2 silver looking flat pieces of metal holding the motor to the head. How do you remove them. Also, a 2 pronged black plastic lever fell out while I was disassembling it. Where does this lever go.

The 2 silver neck rods turned out to be removable by pulling out. The trick is to get the rod out enough to grab it. I used a small flat head screw driver to lift it out a bit, then grabbed it with a pair of pliers.

Also, the 2 black plastic levers turned out to be holders for the IR circuitry board, which I realized by looking at the ifixit pictures on line.

My problem is solved.

Apparently it matters which way you connect it, so if in reassembling the head to the body the pony head acts funny, just remove and re-connect after rotating the potentiometer 180 degrees.