I have been having issue with my Mac Pro A1481, the trashcan Mac. It freezes and becomes unresponsive. Sometimes it will turn itself off; however, when it doesn’t shut itself off, shutdown by holding the power button is required. After a force shutdown it does not start; however, after sitting for a few days, it will start up, but crash shortly after. It’s not possible to reset PRAM after force shutdown because, none of the ports work. I was able to reset it once, and it operated for a few days before crashing. I have taken it to several repair shops and none have been able to find any physical damage or repair the computer. Also, I have replace the CMOS battery. There is a red light on the logic board (if you are looking at the side with the CPU socket with the board oriented in normal position, the light that comes on is the second light in the series of lights on the lower left side). However, I have not been able to find any documentation on the meaning of this light. Is there any insight or advice anyone might have about these problems? 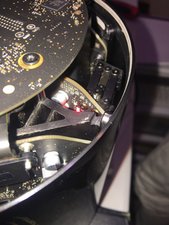