Hi can anyone advise please?

my iMac won’t start up. I have mains power to the psu and the following DC output voltages on pins 1 to 16 But nothing else picture sounds etc it’s completely dead.

Does anybody have the wiring diagram or details of the actual figures for testing my psu before I purchase a new?

Looking forward to some replies ;)

thanks for your time

Hi I just received my new power supply unit and I’m gutted I still only have 1 light on my board while viewing in the dark from the lower vents ;(

I,ll save you the trouble. See Diagram below. The are four diagnostic LED’s located on the logic board. The LED meanings are as follows, but if LED #1 and LED #2 are on then the power supply is OK. You can only see the LED’s through the vent holes to the left of the memory modules on the bottom of the iMac. I had to make the room completely dark to be sure if they were on or not. All of mine were off and I tested that there was power coming out of the cable and into the imac with a multi meter 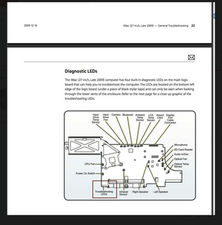 logic board. This LED will remain ON whenever the iMac is connected to a working AC

power source. The LED will remain on even when the computer has been shut down or

put to sleep. The LED will turn off only if the AC power source is disconnected or the power

properly. This LED will be ON when the computer is turned on and the power supply is

• Indicates that the computer and the video card are communicating. This LED will be ON

when the computer is communicating properly with the video card. If LEDs 1 and 2 are ON

and you heard the startup sound, but LED 3 is OFF, then the video card might be installed

• Indicates that the computer and the LCD panel are communicating. This LED will be ON

when the computer is turned on and video signal is being generated. If the LED is ON and

there is no image on the display, then the LCD panel, the LED backlight board, or the cables

Hi, many thanks for taking the time to send me all this information. I did notice recently during complete darkness that I only have 1 Led on while looking through the bottom vent ;( so that would confirm then that my PSU is not working;) that’s amazing

Hi there, new psu fitted and still only 1 led light on and it doesn’t fire up ;( any recommendations? Thanks

Paul what number LED is on. ? You mentioned that you have one LED light on which indicated the PSU is faulty. I don't think that is the case because the description for LED 1 ends with “. The LED will turn off only if the AC power source is disconnected or the powersupply is faulty.” which to me infers that the only time the power supply can be considered faulty is when ALL the LED lights are off.