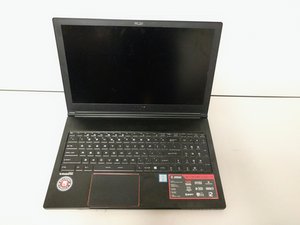 Why is my battery LED light flashing orange/green periodically?

I’ve had my MSI gs63vr 6rf stealth pro for nearly four years now, and the original battery was completely fried. I ordered a new one last week and replaced the battery, and at first it was working fine. However, I noticed that at a certain point it wouldn’t charge the battery past 70% and when it stayed on the charger, the battery LED light would flash orange to green to red, in a cycle. If I ran the MSI battery calibration program it would normally be fixed, but after a few charge cycles it would start doing the same thing again.

I updated the BIOS, obviously ran the calibration program a few times, and removed the battery to make sure it wasn’t a problem with the AC adapter cord (laptop still turned on and worked without the battery). I also removed the battery and pressed the power button to flush the motherboard.

I figured it was most likely the new battery was bad, so I asked Amazon for a replacement. I replaced the battery today, ran the MSi battery calibration program again and then re-charged it to 100%. So far, so good. However, about five minutes after I took it off the charger the battery LED started flashing an orange light at me again. No red or green, just orange. It stopped after another five minutes. I ran a battery troubleshooter and tried to figure out wtf was going on, but I still can’t figure it out.

Is my motherboard just fried?

Edit: I’ve also noticed that the second battery seems to be decaying at a fast rate. It started with 62,700mWh and then decayed to 59,700mWh charge capacity within 24 hours, which seems ridiculously high.