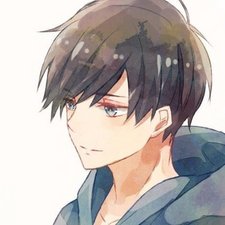 New iFixit Battery Not Charging, Despite SMC Reset and Other Tests

This question is a bit of a long one, but I felt that context would be necessary, so here we go:

I recently took it upon myself to assist my mother with her MacBook Pro, as it would only last for 30 minutes to over an hour on a charge—obviously the aging battery was in need of replacement. iFixit guide on-screen, I assumed it would be an easy fix, besides disassembling the laptop, removing everything down to battery itself, and using the provided adhesive remover in the iFixit battery replacement kit (along with some rubbing alcohol) to remove the strong adhesive binding the battery to the top case assembly to gently pry out the old battery. Reassembly went flawlessly as well. But when it came time to charge and use the battery… well… that’s when the fun began.

First, it wouldn’t charge. No matter what I did, it wouldn’t charge. I assumed that I maybe didn’t fully connect the Magsafe board to the logic board, but disassembling the laptop again proved that theory wrong. Of course the laptop continued to work over Magsafe, but as soon as it was unplugged, the Mac would loose power, and shut off within seconds. It has been only at either 1 or (mostly) 0% for the past week now.

Secondly, I tried out a plethora of Magsafe chargers, even getting the original Magsafe to Magesafe 2 adapter to test out many of my working older chargers. But the results wouldn’t change. A couple SMC resets and a PRAM reset also proved to be ineffective. Apple Diagnostics refused to work, as they would on any Mac before June of 2013, but that confusingly also made Apple Hardware Test not work, even with a fresh install of a couple different operating systems, both post and pre Mojave (what has been currently running).

Finally, this has all brought me, feeling nearly defeated in my search for answers, to here. Sure, I could look into a replacement motherboard if that is indeed the case or I can entirely replace the computer, but the best option as of now (especially considering the time surrounding this issue) would be a solution that is cost-effective or not costly at all, or that is likely to work, as I want to restrain from taking further risks with someone else’s machine.

If you have an answer to this plaguing problem, then I’ll be eternally greatful, as I am all out of options up until now. I also have the screenshots for the status of the battery attached. Thanks. 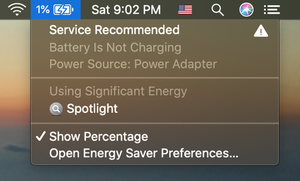 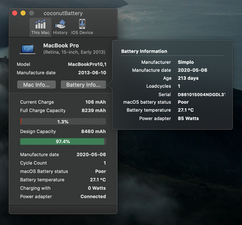 Well, I purchased another battery from another source, as it seems that is the main issue now. I won't add any further updates here. Thanks.

Sadly, your charging logic is damaged on the main logic board. A common source of this is using a knockoff charger!

You’ll need to find someone with the deeper skills to fix your logic board.

● Don't Replace Your MacBook Charger With a Cheap Knockoff

Yeah, it seemed to me that would most likely be the case.

The Mac's knockoff charger came bundled with the laptop from the repair shop it was purchased from--makes me sad how people try to screw up people's belongings in the sneakiest ways to have them come back again for repairs. Sure, it's just business, but it's cruel and it highlights the kind of person one is.

I'll bring it to someone trustable and with more knowledge and we'll see what transpires. Thanks for your help on this matter.