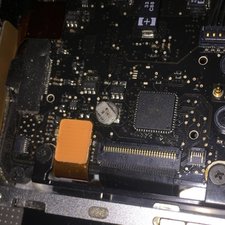 MacBook Pro not turning on

It’s not turning on, the charger turns orange, but trying to reset the SMC doesn’t appear to work, as I don’t get the confirmation blink turning to green.

What do: This is an ‘as is’ computer I bought, so don’t have a lot of history on it except the owner claimed it worked when he last used it. Was stripped of RAM and HDD, so I put them in.

No beeps when trying to start. Nothing! Not powering on at all, but charger indicator is Orange.

Edit: Could this be the problem?

one more detail, the three long screws at the back are missing, and instead are the small screws. Unsure if I can replace with 'newer' 14mm screws from the 2009+ models of the same make.

With the computer open and sitting on a table in from of you, look at the left hand side of the top case (the component which houses the keyboard and trackpad). You should see a small gray button with about 8 perforated holes next to it. Press that small gray button. Do the perforated holes light up? If so, how many lights does it show? (This indicates the charge of the battery and can help us determine whether or not the battery is completely drained).

I'll try later, but it's been laying bare for several years, so I'm pretty sure the battery is drained. It should still turn on though, yes?

There was no 13" model with a split bottom cover (able to replace the battery without taking the bottom off) I've corrected the model info to the 15" model which does.

I'm sorry, but I'm actually looking at a 13-inch right in front of me that has the split bottom..

On the Left side is your systems battery checker

With the charger disconnected what happens when you press the button? Do you see the small 10 LED’s? Are only a few lit? Are they blinking?

I'll have to check later. Thanks!

Nothing. No light light up when I push that button.

Right. Could I get the machine to start if I completely took out the battery, you think?

Ok, so, found the culprit with the battery. There was a slightly loose connector, (I think that was the DC one), I plugged it all in, and suddenly the battery blinks when pushing that side one.

However, the machine still does not start. That also goes for when not having battery in.

Starting to wonder if the keyboard and power button simply isn't properly attached. Which connector is that?

All other connectors seem to be fast. Gut feel definitely is that it's not registering my keyboard or power button push at all

Will try. Going to post a picture in edit of a cable I suspect may be the problem in a sec. Input would be appreciated.

No on the spontaneous reboot. Is it possible the power-button is not connected?